With a little help from my friends, Part I

As I wrote about last week, my G5RV antenna came down as the result of a storm. My original plan was to try to repair the existing antenna, but after examining it further, I decided that I’d be better off buying a replacement which is exactly what I did. (I’ll look at fixing the old one one of these days.) Matthew, K2NUD, and David, K2DSL, volunteered to come over last Saturday to help me get the antenna up in air, so we planned to meet at my house at around 2:30 which would give me enough time to run out to KJI Electronics to pick up the new antenna. The one that they had in stock from from MFJ and while it didn’t seem to be build as sturdily as what I’d had in the air, I figured that getting some copper in the air was better than nothing.

The old antenna was suspended between two trees with the farthest end being at probably 60 or 70 feet in the air. (I’m terrible at estimating height, but I know that it’s significantly higher than the roof of my house, which is at about 35 feet or so.) The antenna snapped at the far end, leaving the line suspending it about 50 feet in the air and somewhat tangled in the branches. As a result, it wasn’t possible to get to that rope to re-use it, so Matthew came up with a better plan: a potato gun. The link tells you lots about potato guns, but in a nutshell, this is a gun made from PVC pipe that’s used to fire a potato. (Why would you do that? Because it’s unbelievably fun!) In order to get the potato to do something other than just shoot up in the air (and make a pretty cool sound), we put the throw bag which trailed 100 feet of line on top of the potato which worked like a champ. 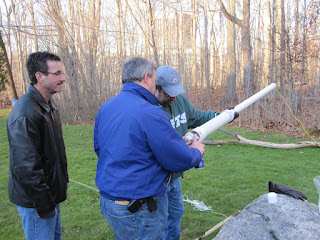 The way the potato gun works is that you put the “fuel” (old-fashioned non-environmentally friendly Aqua-Net hairspray) into a chamber and ignite it which forces a potato, previously jammed down the barrel, up and out of the barrel at a pretty high rate of speed. In the picture here, Matthew (green jacket) is holding the gun while I spray in the “fuel” into the combustion chamber. That’s David on the left. Somewhere out there I’m sure someone has done some calculations about amount of force that’s being generated to launch the potato that far (not to mention the added one-pound throw bag), but physics aside, as I mentioned earlier, it’s fun to watch.

It took a few tries, but Matthew managed to get the line over the right branch, which is a lot more difficult than it sounds. Although made somewhat easier by the fact that there are no leaves on the trees at this time of the year, it’s still a lot like threading a needle that’s about 50 feet away and 75 feet in the air. We came close a couple of times, but Matthew wanted to keep trying to get it exactly right, which I think was an excuse to fire off a few more shots. There’s more to the story which I’ll talk about in Part II, but here’s a video taken by my son Justin during one of the “firings”. (If you’re reading this in an RSS reader or email and can’t see the video, you click here to go directly to the video on YouTube.)