On the last day of the year, it seemed like a good idea to get in one more SOTA activation. It turns out that I had not been up Mt Herman (W0C/FR-063) all year, even though it’s close by. See this page for the trail description. Joyce KØJJW and I decided to hike up in the morning, reaching the summit around 11 AM local time.  This was my third SOTA activation of Mt Herman, but I’ve operated from there many more times in various VHF contests (back before SOTA was a thing in Colorado). 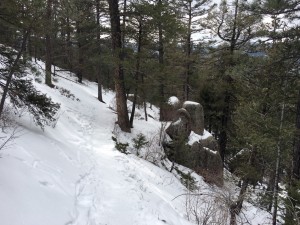 The road to the trailhead was in good condition but snowpacked and icy. This road is not plowed during the winter but it is often passable with a decent 4WD vehicle. Today, you could make it to the trailhead with 2WD and some careful driving. The trail conditions were typical for winter time: almost completely covered in snow with a few bare spots showing here and there. The trail was packed powder and not particularly icy. Still, we appreciated having traction devices on our boots. This trail can be downright treacherous when it ices up, so traction devices (Yaktrax, Microspikes, etc.) are highly recommended. Trekking poles can be helpful, too. 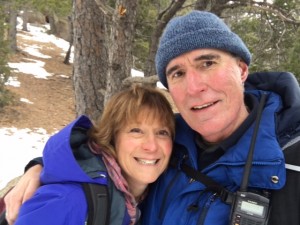 Joyce K0JJW and Bob K0NR on the trail.

Once at the summit, I used my Yaesu FT-60 handheld radio and a half-wave vertical antenna to work people on 146.52 MHz. Having notified a number of people that I would be on the air, I actually had a bit of a pile up on 2m fm. In short order, I worked KE5QNG, WA6MM, KH7AL, WG0AT, W7AWH, K9MAP, K0JQZ, K9DBX, W0STU, KD0MFO, WB0ROK, KD0VHD and KL7IZW. Best DX was about 50 miles with W7AWH in Pueblo West. Thanks to everyone that got on the air to work me.

The weather was cold, about 15 deg F, so we didn’t stay too long on the summit and headed back down the trail. OK, maybe “winter assault” is a bit of an exaggeration. Let’s call it a fun hike in cold weather.