A few days ago I dug out of the cupboard the Wonder Loop portable magnetic loop that I made a while ago. I had lost the pieces of uPVC electrical conduit that made a Heath Robinson support for the coaxial cable loop element. But I had always felt the saggy coaxial loop was a bit of an eyesore anyway. So I decided to make a new loop using microbore copper tubing. It turns out that you can buy this stuff on eBay – any diameter and length that you want shipped to your door next day by first class post. Three metres of 1cm dia tube cost just over £12. 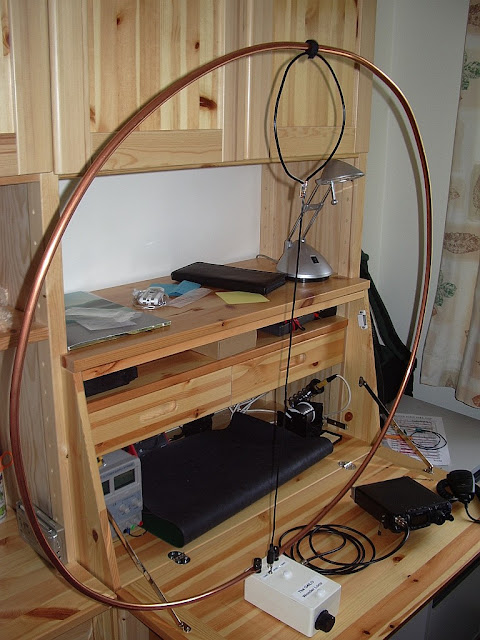 The new loop looks a lot better and certainly hasn’t harmed the performance of the antenna which continues to amaze me. I tested it using WSPR at a 1W power level on all bands (40m – 15m) that my Wonder Loop covers. The best result was obtained yesterday afternoon on 20m, between 16:30 and 19:38z, when I received 15 reports from VK2XN of from -9 to -25dB SNR, at a distance of 16579km. This, I repeat, was using just 1 watt from the FT-817 with the Wonder Loop sat on my shack “workbench” almost exactly as in the picture. (The FT-817 was moved to the radio/computer desk during transmission.)

I also spotted 9 reports of VK2XN during the same period, which surprised me due to the extremely high noise level I have here on 20m. The SNRs weren’t so good, though, and he was running 10 watts. Still, that almost qualifies as a two-way contact.

I haven’t tried other modes yet, mainly because the shack is so small and these days I’m a bit wary about sitting inches from an antenna even if it is radiating no more than a watt or two. But the original Wonder Loop was very successful using PSK31 and I hope to try this one with JT65A shortly.

The one disadvantage of the new copper loop is that it isn’t exactly portable, which had been one of my original objectives when building the antenna. If you could get hold of some metal strip it might be possible to make the loop from six pieces that you can join together using bolts and wingnuts to form a hexagon. Possibly you could even do this using tubing, flattening the ends of each 60 degree segment and then drilling them so the loop could be bolted together. But as I’m not planning on taking the antenna anywhere at the moment I’ll keep the one-piece loop which I can stick behind the shack door for storage.

This is a really great antenna that should enable anybody to operate HF from anywhere.

One Response to “Whispering with wonder”