When simple turns to exhausting 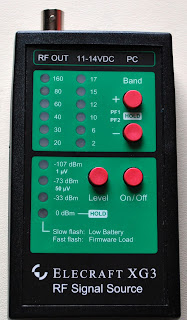 Three weeks ago I ordered from Elecraft there XG3, it's an RF signal source device with a range from 1.5 to 200 mhz,  two programmable sweep functions, 12 programmable bands  (2m to 160m) and 4 calibrated output levels as well as a few more bells and whistles. This unit can be updated via your PC which is great when Elecraft comes up with bug fixes and new options for the unit. You can either power the device by a 9 volt battery or your DC power supply (11 to 14 volts DC). One of the reasons for me purchasing this unit was it can via software preform an Rx Sideband Null Field Calibration. This is an experimental Field Calibration program and the instructions and program were sent to me via Elecraft support. The reason I wanted to do this calibration was to stop the "woodpecker" effect I was getting on my KX3 during CW contests with stations that were very close by. The program needs run for around 20 minutes to complete and I thought this would be a great Saturday afternoon project.....not thinking that 20 minutes would turn into 2 hours with the calibration not even starting!!

To do the test you first have to make sure the XG3 has the latest firmware loaded so I plugged in the supplied USB cord to update the XG3. I had the "new hardware found" info box come up and I then began the search for the USB port......well for some reason I was not able to find it. I then just plugged in my KX3 USB cable I use to update the KX3 rig with and it's com port 13. I used that cord and plugged it into the XG3 and had it look at com 13 and all was well. It seemed the firmware was up to date. For the calibration test I needed to have both the KX3 and XG3 running on USB ports of their own. So I swapped some USB cables around and I was able to see my XG3 on com 19. That was great (so I thought). I started up the RXsideband null field calibration program and the first thing I was asked was to enter the com port of the KX3 and XG3. I entered the KX3 (com13) and  the program said all is well and was able to see the rig. I then went to enter com19 for the XG3 and the drop down menu in the Elecraft program only went to com port 16!!!! WHATS UP WITH THAT!!! So the calibration test came to a fast end. All this farting around took 2 hours of my time and got nothing done......I went into my device manager to see what was going on and I tried to change the XG3 to a lower com port number but I was informed that all com ports from 1 to 18 are in use, funny thing is I don't have 18 USB items to take up that many ports.....but I do have LP Bridge and VSP manager that create virtual ports and also an 8 port Edge port device that takes up virtual ports as well. My question is why does the XG3 program only go up to com port 16.....N1MM does the same thing and it's a pain!!! So I will be emailing Elecraft support to see if there is a solution to this or maybe I will go the Mac way and set this up on my wife's mac computer.
Mike Weir, VE9KK, is a regular contributor to AmateurRadio.com and writes from New Brunswick, Canada. Contact him at [email protected].

One Response to “When simple turns to exhausting”