When Everything Has Failed 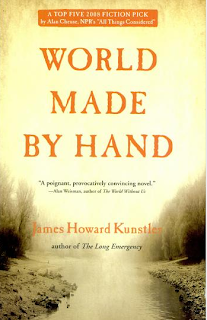 During my radio and computer-free getaway on the high seas last week, I read World Made By Hand by Howard Kunstler.  The fictional novel takes place around perhaps 2030, several years after oil has run out or has become so scarce that essentially our entire modern infrastructure has ceased to function and we're thrown back into a lifestyle reminiscent of medieval times.  The electrical grid is non-functional, the telecom network is gone and forget about the Internet.  Transportation is entirely by animal or on foot.  Food is locally grown and no longer benefits from petro-chemicals or irrigation.  The government has broke down and civil wars have broken out in most of the major cities which are uninhabitable due to overpopulation.  Disease is rampant due to a lack of medicine or readily available medical care.  Overall, it's a rather bleak picture.

The main character of the story, Robert Earle, has lost all of his family due to epidemics and other bad stuff, but him and others in the town of Union Grove, NY are attempting to get back to normalcy, or the best that can be expected in this new world.  Radio surprisingly doesn't get much of a mention in the story.  At the beginning of the story the electricity comes on once every few weeks or months and for very short periods, sometimes seconds, with a household AM radio left on to signal its arrival.  Earle is only able to find a few AM broadcast stations carrying evangelists and unfortunately he lacks a shortwave radio.  Eventually Earle breaks with the past and his hopes for the old world to return and symbolically turns off the AM radio.

Being the radio artisan I am, my mind began to explore the technical side of this.  I think in this post-apocalyptic world some form of amateur radio would survive and would likely be the only network for information and communications.  We've proved over the years beyond a doubt that low power operation works, and with energy in such short supply, low power would be a necessity.  Even a simple low power radio fashioned much like a Pixie or a Rockmite would be priceless.  I envision radio communications networks forming, much like they did in the early 20th century, to pass messages.  When the Big One (tm) hits communications won't involve florescent yellow vests and go kits, it will be scrounging wire and parts from landfills and making homemade batteries and generators.  Who knows, maybe even spark will make a comeback.  In the story it's clear that those with food, energy, natural resources, and people are those with power.  Communications would undoubtedly be another source of power and those with the ability to communicate long distances would be an asset to their community, or as was often the case in the story, a feudal lord.

Despite being a story of gloom, pain, and despair, there were times of great joy, beauty, and simplicity.  It certainly made me think, especially while reading on a huge hunk of metal in the ocean with nearly 5,000 people on board and enough fuel to power a small city.