What I’ve been playing with over Christmas and New Year (anyone want a nice FT1000MP?)

With my return to work on the horizon on Monday, I’ve been thinking about what a nice holiday I’ve had. Although I’ve had to do a bit of work here and there, it’s not been too onerous which has been welcome.

I’ve not done anything exceptionally different this holiday, but it’s been nice varied activity. There have been a couple of sessions when I bounced my 144MHz packet signals through the digipeater on the International Space Station. That’s always satisfying and nice to do – particularly with a very simple aerial.

I missed the ISS’ SSTV operations but all of that made me think about operating SSTV a little and it’s been fun to play with and I’ve had 2 or 3 nice ‘QSOs’ or picture exchanges with many other pictures being seen. 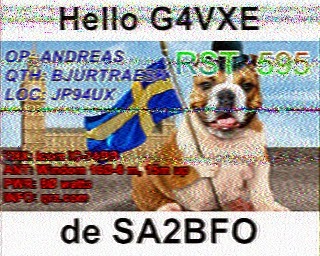 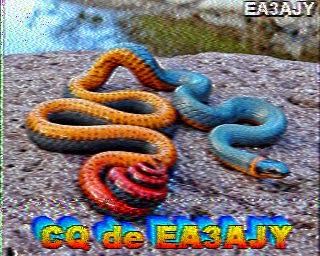 Fun to play with for something different!
It has been nice having the TS940 on the bench to tune around with. I find it is a lovely rig to tune the bands with. I wondered whether I would feel the same if I put the FT1000MP on the bench and tried using that in the same way. It just didn’t feel quite as nice, despite the two receivers and the internal ATU and being a generally lovely rig. So I have made the decision to let the FT1000MP move on. It is in nice condition and works well and I am sure someone will have fun with it (if you’re interested – drop me a mail tim at g4vxe dot com). So despite the TS940s foibles, I think it will stay here and we’ll try and keep it going.
On HF, I’ve not made any exceptional contacts, but it’s been fun to work the 1A0C expedition on a few bands. I’d worked 1A0 on 50MHz before but strangely not on HF. Otherwise, it’s just been looking across the higher bands as they’ve been open.
I’ve upgraded the station logging program, uLog from M0PZT who has a new release out.
I noticed a new product from SOTABeams, the BOXA-MWEXTREME which is a fun little box (an attenuator really) which, in conjunction with your low power HF rig, allows you to run very small amounts of power indeed, allowing an HF rig running between 1 to 5W to drop the power down as low as 50mW. It’s RF switched, so the receive path is not attenuated in the same way (though on HF you probably could on some of the bands!). I thought that would be fun to try, so I’ve pre-ordered. Not sure whether my long cable run to the HF6V will be conductive to that, but we will have a go.
Happy New Year for 2015!
Tim Kirby, G4VXE, is a regular contributor to AmateurRadio.com and writes from Oxfordshire, England. Contact him at [email protected].