What I’m up to at the VLA

Back last November I was offered this internship to work for up to 8 months at the Very Large Array, as you see pictured behind this post. The VLA is the worlds most prolific radio observatory, having the most citations in of any radio observatory in all of science. I could not turn this offer down/

The VLA is a well oiled machine of 27 cassegrain feed parabolic reflectors each 25 meters, or 82 feet wide, that send concentrated RF to massive feedhorns at its vertex. One VLA dish covers all frequencies from 1-50 GHz, and has two extra bands at 74 and 350 MHz using extra antennas. Together, they can make a dish that theoretically measures over 20 miles in diameter!

My primary job at the VLA is to learn. Everything RF exists here, so I’m soaking up as much as I can. I’ve learned more about microwave RF design, Radar, synthetic aperture synthesis, correlation, radio astronomy, antenna design, transmission lines, test equipment, RFI, and much more that I have ever (and perhaps will have ever) at college.

Learning is a sort of meta-job. What I really do is two-fold.

The first fold is Interference Protection. The IPG specializes in the detection, location, analysis, and mitigation of radio frequency interference that has the potential of ruining and/or corrupting observations of the radio sky. The VLA is located in a lake bed, 20 miles away from any town, 90 miles from Albuquerque, surrounded by 360° of mountains that buffer the observatory from radar, wifi, cellular, aircraft, and other terrestrial sources of RFI. Satellites are also a source of RFI, so they must be documented and their transmissions well understood so that the VLA Correlator  can learn how to discern orbiting transmitters from galactic transmitters.

On IPG, we’ve done a few RFI Site Surveys at places like the Magdalena Research Observatory on South Baldy and at the Pie Town VLBA site. Unfortunately, a Verizon 4G LTE cell tower exists on a hill only 5 miles from the center of the array. The signal it produces isn’t bad — it’s the amount of visitors who show up with a full signal, assuming it’s okay to use their smartphones to upload photos, videos, sprout WiFi APs, and cause all kinds of problems. That’s when we break out the CELL PHONE DESTROYER 6000.

For quieter RFI, like satellites and terrestrial transmitters, we use a big-ugly 10-foot dish with a wideband conical-log spiral feedhorn to determine bearings to RFI: 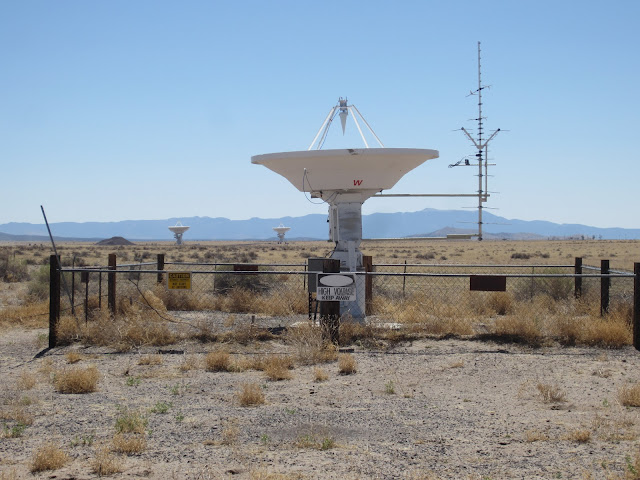 Along with intentional radiators, unintentional  transmitters like microprocessors, screens, TVs, and other electronics produce noise that can be detrimental to the RF environment. Such electronics need to be tested in the Reverberation Chamber, and shielded if necessary.

The second fold is Front End — Front end of receivers that is. On the FE group, I’ve been tasked of removing old low-band receivers (74 and 350MHz) and installing new consolidated ones along with about 200 feet of heliax and control cables for them. I’ve also been building and improving antenna designs for the LBRs, including the new strut straddling dipoles pictured above. I’ve come across a cool 74MHz widebanded antenna design that may or may not be patentable, so we’ll see from it’s creator if I can get acknowledged in a paper or something 🙂

The LBRs are located in the apex, also pictured above. It’s fun becoming a grease monkey while getting a view of the VLA few have seen.

So how did I get this job? Ham radio of course! My boss actually e-mailed me after an unsuccessful run through career fairs and internship searches for this summer. He noted my experience with the Missouri S&T ARC, W0EEE, as a big kicker on my resume. At S&T I’ve done a lot of work mitigating RFI, fixing repeaters, learning about radio, and having fun with it. He himself is a ham, albeit inactive, but still understands the value a license can have at such a job.

Today Paul Harden (NA5N) and I will be installing a few new LBRs in antennas 18 and 20. The weather looks beautiful for it too! Check out Paul’s personal website, chock full of receiver data, photos, and the history of the area.