Late last Summer, it came to my attention that the 903-MHz W3APL beacon had gone off-line.  The failure was intermittent and seemed to resolve itself after power was reset.  Several efforts to troubleshoot it were undertaken by myself and others, including running it at high duty into a dummy load over a period of days.  I was unable to get the problem to manifest itself on my bench.

A synthesized source (Analog Devices demo board) was offered by a friend of the Club, however it did not produce the desired output (or any output at all).  It’s not clear whether this was the fault of the synthesizer or the user (me).  The notional plan was to replace the beacon, which consists of a 75-MHz crystal oscillator followed by 12x of multiplication and a small RF power module, with the synthesizer and a new RF power module.  The project languished, as they often do in my hands.  But, two weeks ago I picked up the task again and made some real headway.

Really, the failure had to be one of a couple of things:  1.  Intermittent connection exacerbated by thermal cycling.  2. Oscillator “unlock” due to component aging and thermal cycling. I reasoned that as long as we could eliminate #1, the multiplier chain and amplifier should be fine.  The behavior seemed to point toward #2 or perhaps a combination of #1 and #2.  I came across a forlorn Programmed Test Sources PTS-040 that I had rescued from another group’s surplus heap to put in my lab.  I hadn’t used it in the two years that it was in my possession, so it seemed logical to provide it to the Club on a long-term loan.  The problem was that it didn’t go up to 75-MHz.  So, I cooked up a little multiplier chain.  My “good” HP spectrum analyzer is on-loan to a paying program so I had to make do with the FFT function on the fastest Tektronix portable scope I had in the lab.

My initial effort at the multiplier chain was to build a 2N3904 amplifier that swung way into saturation producing a signal rich in harmonics.  I went straight away for the 903-MHz signal but I couldn’t get a good enough lumped-element filter to eliminate the adjacent harmonics.  So, I tried for the 75-MHz injection.  This demanded a buffer amplifier so I lazily reached for the MMIC drawer in and retrieved one of the plentiful MAR-8s.  Plenty of gain…and, as I would find out in a moment…conditionally stable!  To exercise the eloquent euphemism of Ben, N3UM, the MMIC “burst into song” at about 63 MHz.

Back to the drawing board.  I knew that I had something that would work, so I redesigned the deadbug layout on an SMD protoboard (the kind with all the pads in a grid).  I replaced the discrete 2N3904 and MAR-8 MMIC amps with SGA-4586Z MMICs (which are a little too nice for this service, but I have a ton of them).  Viola! 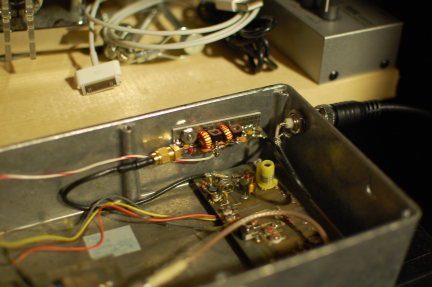 It’s the little board on the far wall of the diecast box with the SMA connector on the left and two toroids.  37-MHz RF comes in from the PTS-040 through the BNC jack in the wall.  It’s multiplied up to 75 MHz on the new board and piped down to the remaining 12x multiplication and amplification stages before going to the little brick PA in the lower left (not visible).

So far, it sounds good.  I was able to monitor it with my W1GHZ transverter strapped to the IC-290A in my car and using a WA5VJB cheap Yagi tossed in the back seat.  I lost the signal about 5 miles away with that setup, which is really pretty decent all things considered at that frequency, etc, etc.  Nominally, the frequency should be 903.054 MHz.  I found it at about 903.048 MHz on the lash-up.  Brian, ND3F (aka N3IQ/R) reported that he found it at 903.046 MHz with KA3EJJ’s setup.  If you’re in the vicinity of FM19ne and are setup on 902/903, we’d appreciate a report.  The big thing is the long-term stability.  So, we’ll continue to monitor it.