As mentioned previously, today was the Raritan Valley Radio Club (of which I am a member) Hamfest.  I got up bright and early at 4:00 AM to be on site by 5:30 AM, in order to help direct vendors and sellers to their spots in the Piscataway High School parking lot.

Providence was with us, and after a few days of soaking rain, when the sun rose this morning there was absolutely not a cloud in the sky.  In fact, for the duration of the hamfest, the sky was that deep, clear crystal blue that you see maybe only 4 or 5 times a year.

Things started off really slow but in the end, we ended up (again) having more sellers show up than last year and more buyers, too, which is a good thing!

Sadly, I really did not get a chance to browse and peruse the tables much.  In addition to my parking duties, I was asked to serve as one of the VEs for the test session that we held. 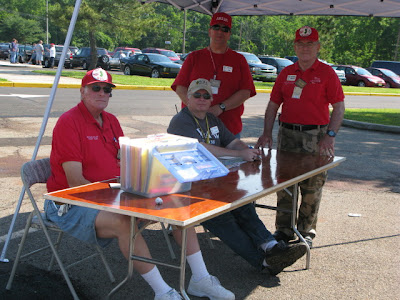 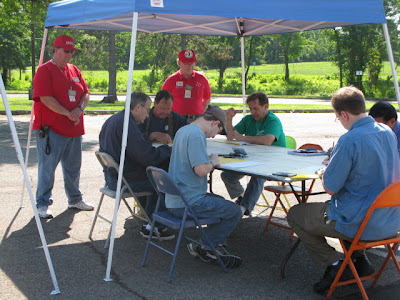 Tim AB2ZK and Marv K2VHW keeping things under control with their iron fists.
We had 10 candidates come in for testing, and one candidate who wanted to upgrade walked away in a huff because we told him that he had to supply a photocopy of his license as per “da rules”.  He didn’t have a photocopy (only his original, which we were not about to take) and no one in the parking lot had a copy machine so he was a bit perturbed and literally stalked off.  We tried to tell him there was a supermarket near by where he could have gone to have a copy made, but for whatever reason, he was so annoyed that we didn’t see him for the rest of the day.  Just goes to show that you can’t please everybody.
Of the nine remaining candidates, two upgraded – one to General and one to Extra.  Six others got their Technician class license and one walked away empty handed.
By the time the VE session was completed and we had checked over all the paperwork and details, some of the sellers had actually left and a lot were packing up their wares.  I ended up doing a very quick run through.  I purchased a new binocular magnifying headset to replace my old, scratched up one.  This one has two LED flashlights built in.  I also ended up purchasing a hand held magnifying glass.  It’s tough when you start getting older, only to find out your eyes aren’t what they used to be!  I also purchased two 90 degree angle BNC to PL259 adapters for the KX3 at the good price of $3.00 each.
I really wasn’t looking for anything in particular, but would have enjoyed a more leisurely window shopping session.  Luckily, I will be able to make the Sussex ARC Hamfest this coming July.  That’s always a good hamfest and I will be able to peruse to my heart’s content as an anonymous attendee.
72 de Larry W2LJ
QRP – When you care to send the very least!
Larry Makoski, W2LJ, is a regular contributor to AmateurRadio.com and writes from New Jersey, USA. Contact him at [email protected].