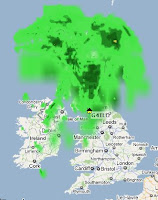 Conditions could hardly have been worse for the RSGB’s VHF Field Day contest this weekend. Yesterday I worked a few southern Scottish portables on 2m and 6m, plus the Lincoln Radio Club station G5FZ/P on 2m, and that was that. There did not appear to be a shred of Sporadic-E on either 2m or 6m, according to DX Sherlock. 6m was so quiet my K3 S-meter wasn’t even moving.

Today when I turned on the radio I tuned both 2m and 6m without hearing a single signal. The map on the right probably shows why. We awoke to heavy rain and gale force winds, and I immediately thought of those poor guys on hilltop sites with their guyed poles supporting their beam antennas. If the wind didn’t force them to take the antennas down I dare say the rain and the poor propagation made them decide they might just as well give up.

This has been a really disappointing year for me too, VHF-wise. After working Spain and Portugal on 2m on two separate occasions last year – the last being exactly one year ago – I improved my antenna by 3dB and my output power by 6dB in the hope of doing better during this year’s season. But I have worked nothing and as far as I know the sporadic-E this year has hardly been heard this far north. DX Sherlock showed that a couple of well-sited northerly stations managed to make a few contacts a few weeks ago and I fleetingly heard a station from Romania complete a contact and call CQ at that time, but that was that.

Something is becoming clear to me that I never realized when I lived in the south, which is that just a couple of degrees of latitude can make a huge difference to the amount of Sporadic-E you get. The season isn’t over now but it must be on the wane and I’m soon going to be away from the radio for a couple of weeks, so it’s looking as if 2010 is going to pass for me without any 2m Sporadic-E DX.