Yesterday I was out hiking round the back of Skiddaw in Wainwright’s Northern Fells to activate Great Sca Fell (LDW-114) and Brae Fell (LDW-134). One reason for being out and about in that area was that Phil G4OBK was planning to activate Great Calva (LDW-095) which is one of the three summits I need to complete the Northern Fells as a chaser. I’d have been less keen if the weather had been miserable, but Thursday was a glorious day, sunny but not too hot and without the breeze that can often make it icy cold on the tops even when it is warm in the valleys. 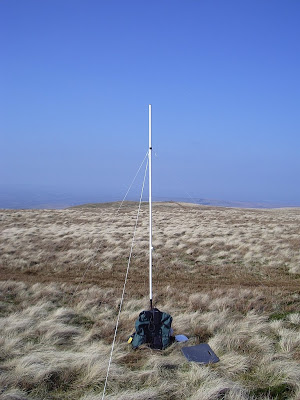 It is a long, steady plod up from Longlands and I reached the summit of Great Sca Fell around 12:30. I put up the WOTA Pole and then sat down to eat my lunch. To raise the height of the antenna I used my walking pole for the bottom section. This didn’t give me as much extra height as I’d hoped as the inner sections of the telescopic pole slid up inside the PVC tubing so I had to collapse it and just use the thickest, topmost section. 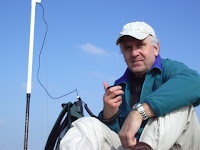 I connected the VX-8GR to the antenna to beacon my position on APRS while I ate the lunch Olga had made me. I tuned around whilst I was eating and heard a couple of distant stations. I observed their signals being desensitized intermittently. Clearly the VX-8GR receiver is not up to being connected to a good antenna in a good location.

After lunch I connected the Motorola GP300 – which has a much more robust receiver – to the antenna and began calling CQ WOTA. I worked 11 stations in all from Great Sca Fell, but they were all from the northen area as signals to the south were blocked by the great bulk of Skiddaw and Blencathra. I waited for Phil G4OBK to arrive on his first summit of the day, Bakestall, so we could have a summit-to-summit contact. I then called upon Mark MM1MPB and Colin 2E0XSD to help with my second objective of the day, which was to do some tests to see how much difference the WOTA Pole made to my signal compared to other antennas.

First I compared the signal between the WOTA Pole (which is a Slim Jim made of 300 ohm ribbon cable inside some PVC electrical conduit) and the 5/8 wave telescopic Black Whip antenna from jeepbangkok on eBay. I’d been pretty impressed with the 5/8 telescopic on previous activations but the reports from Mark and Colin suggested that the WOTA Pole was a couple of S-points better.

Unfortunately while extending the telescopic antenna to make the test I broke it! That’s the end of that, which is a pity because I’m sure there will be circumstances – such as on busy summits or rocky ones where there is no earth to drive the guy pegs in – where the telescopic would still be useful.

For an additional test I tried an 8 inch long single band helical “rubber duck” which I’d previously established to be comparable to a quarter wave whip and a noticeable improvement over the stock dual band antenna that comes with Japanese handhelds. Colin couldn’t hear me on the helical at all, while Mark’s verdict on my signal was “awful.” So the WOTA Pole is very definitely worth the trouble of erecting it and enables me to give points to stations that would not otherwise be able to hear me.

I packed everything up and made my way over to Brae Fell which was half way back to the car by another route. I set up the antenna and finished the rest of my coffee. A lone skylark, perhaps the first of the year, circled calling overhead. I began calling on the radio. Again there were plenty of takers. I worked 12 stations in all including another summit to summit with G4OBK/P on Great Calva. 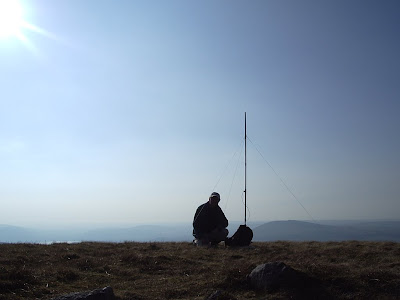 So a successful day out (apart from breaking an antenna.) I just need to work someone on Mungrisdale Common and Souther Fell to complete the Northern Fells. They have been activated before: unfortunately they are not workable from home due to being of only moderate height and on the other side of Skiddaw. As they are probably the two most boring hills in the entire Lake District they are not often visited so I may have a bit of a wait until I can claim my Wainwrights On The Air Northern Fells chaser certificate.