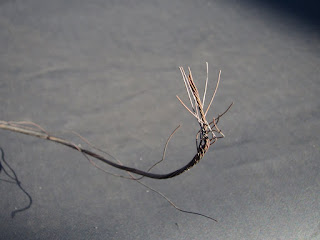 It was bound to happen sooner or later, but that doesn’t really make it feel any better. At the edge of my backyard there is a tree that I was pretty sure had died (given the lack of leaves through the past spring and summer), and I’d planned on having a tree service look at it next  spring. A series of rainstorms with a lot of wind passed through my part of the world yesterday (I’ll bet you can guess where this is going). One of the three small trunks from that dead tree snapped off about 8 feet in the air and fortunately fell parallel to my house so the house was OK. Unfortunately, my G5RV antenna passed through the upper branches of the tree and unsurprisingly was unable to withstand the force of the falling tree. The image you see to the right is a piece of one of the wire legs that use to be up in the air. It is, alas, no longer up in the air. 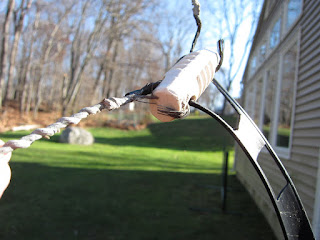 The force of the stress on the wire not only snapped one of the wire legs but also pulled hard enough to break the solder joints at the insulator where the bare wire connects to the ladder line, as you can see in the next photo.  Both ends of the soldered joint were broken, but the non-broken wire leg appears to be OK otherwise and is still attached to the “near end” tree where it was originally attached. The remaining few feet of the other leg appear to have snapped back after breaking and look to be up in the branches of the other supporting tree at probably around 50 feet in the air. I’m hoping that I can get a line over that and pull it down, since that way I can use the existing rope (which is still over a nice high branch) to support the replacement.

For at least the short-term, I am going to try to salvage what’s there. Although this has been up in the air for over 10 years (I didn’t think it was that long, but I realized that every HF QSO that I’ve made from my home station starting in August 2000 has been on that antenna) the other parts of the antenna seem to be in fine shape. (And it was certainly working very well until it came down.) The G5RV is, without question, a compromise antenna, but in the 10 years that I’ve been using it  I’ve managed to work all states, all zones, and gotten DXCC on all bands from 10m to 80m (I still need a few more confirmations for 30m) and on all three modes, and have worked 300+ DXCC entities using this compromise. Would I like a tower with a nice Steppir on it? Sure, but that’s not happening anytime soon, so I’ll stick to what I know works. I have another G5RV that a friend gave me before he moved out of the country, and while I need to verify that the wire is the correct length, it’s been sitting in my garage out of the elements and the wire legs look like perfect candidates for a “transplant”.  The big advantage of repairing what’s there is that it will be zero cost and with a little luck, I should be able to get it done over the weekend.

If I can’t repair it for whatever reason, then most likely I’ll run over to KJI Electronics and pick up a new one and put it up in the same place. I have discussed with some friends the possibility of replacing this with something like an Alpha-Delta DX-CC or possibly even an Alpha-Delta DX-LB Plus (I have the horizontal room, the question is whether I can get it high up enough to function properly), but for now I think I’m going to stick with what I know works.

I hope to have an update with good news soon, stay tuned.