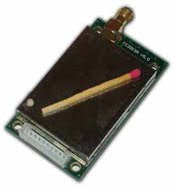 A few weeks ago I set up an experimental low power EchoLink node for use as a personal EchoLink “hot spot” using my FT-817 and a dummy load. I planned to make a a dedicated transceiver / computer interface for this. I thought I found the ideal basis for the project in this UHF Micro Transceiver Module from Elcom Research, a Greek company that makes packet radio and APRS products. The transceiver runs on 5V and can be powered by a computer USB port.

Perhaps I should have been warned off by the fact that an enquiry made through the web form on the Elcom site went unanswered, but I went ahead and ordered the module on 9th April, paying online using PayPal. After a couple of weeks nothing had been received, so I sent an email enquiry and received a reply that it had been sent by air mail and should be with me by the end of the week or the beginning of the next one. This was during the flying hiatus caused by the Icelandic volcano, so I gave it a bit longer. However it is now a week after the week that the module should have been received at the beginning of, and a further email received no answer at all. It looks unlikely that I will receive the module at all, so I guess my only option is to initiate the PayPal disputes procedure.