I think I may have discovered one of the best kept secrets in radio. I have been thinking, off and on, about how to make a very low power 2m FM transmitter in order to get weather data into my APRS system wirelessly. A circuit using the Motorola MC2833P chip is quite easy to build, and I even have one in my parts box, but a custom crystal to multiply up to 144.800MHz would cost about £25 to be made which just isn’t worth it. 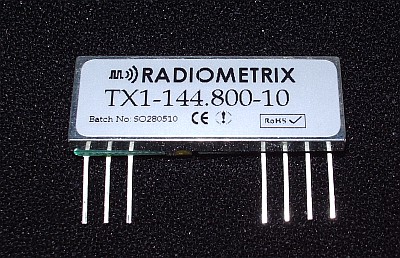 One day I was browsing looking at various APRS articles and came across a tracker someone had built using a VHF transmitter module from Radiometrix. I had come across this site before but thought that a) these modules were only for transmitting digital data not the AFSK that we use, b) they were not manufactured for amateur frequencies and c) they were not available in one-off quantities for individual private purchasers. I submitted an enquiry, stating that I was interested in purchasing one TX1 low power (10mW) module on 144.800MHz if the price was within my amateur budget, and was amazed to be informed that they would be happy to offer the module for £13.00 plus carriage and VAT, with a lead time of five days. In total it came to not much more than £20 which is amazing considering many professional electronics suppliers specify a minimum order value greater than that.

The picture of the module is much larger than it actually is – the pins are the standard 0.1in spacing. As I am nowhere near actually needing to use it at the moment, I hooked it up on the breadboard to give it a quick test. The module does indeed accept an audio input: as described in the data sheet you should bias the input pin and then feed it with audio at a couple of volts amplitude via a blocking capacitor. I lashed it up to my FoxTrak APRS tracker and a braaap was received and decoded by my 2m APRS gateway which was enough of a test to be going on with.

There are several other products with interesting ham radio applications on the Radiometrix website. The HX1 is a high power (300mW) version of the module I bought. With the addition of a PA I could turn my FoxTrak into a standalone tracker. Even by itself it would probably have quite a decent range from the fell tops. Also of interest is the SHX1 which is described as “a small multi-channel 25kHz narrow band VHF transceiver with up to 500mW RF power output, usable for 144MHz band amateur applications.” I think you could build a little hand-held transceiver with one of these, just for fun.

Many of these products aren’t in the online shop so you can’t find out the price or buy online, which is probably just as well as I could see myself ordering some more of these toys for something to play with over Christmas. I would certainly be interested to hear from anyone who has used, plans to use or has some ideas for using any of these little radio modules from Radiometrix.