The weekend was busy, with lots of stuff to do in order to get ready for Mother’s Day, as well as actually celebrate it.  Even though I did not have much radio time, I did manage to get some time in behind the K3 and some good things happened.

The first good thing to happen this weekend was a package that arrived through the mail on Saturday: 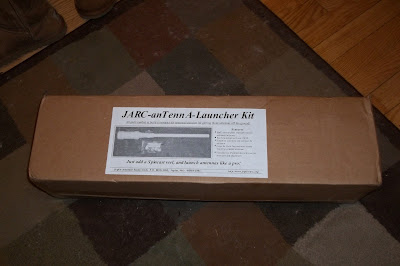 Yes – my JARC Antenna Launcher Kit arrived through the mail. Thanks you Joplin Amateur Radio Club! This is going to be a tremendous help with portable operations this summer.

Late Saturday afternoon / early evening, shortly after my weekly Echolink ragchew with W3BBO,  Bob sent me an e-mail, letting me know that 15 Meters was wide open and that he had worked Z81X in the Republic of South Sudan.  I had just finished washing the floors, so I put down mop and bucket and ran down (literally) to the shack.  Sure enough, there was Z81X on 21.030 MHz, working split and sounding louder than all get out.  The pile up was tremendous!  So following my tenet of when the pile up is fierce and it’s a new one,  to  “Work ’em first, get ’em QRP later”, I turned the K3 up to 85 Watts.  After a half hour of chasing, I landed them in my logbook.  Z81X was like one of our wiley Foxes in the QRP Fox hunts in that he kept moving his listening frequency.  Once I established the pattern, and inserted myself in his path, it just became a matter of time.  Bob worked Z81X at 23:08 UTC and I got him a mere half hour later at 23:38 UTC.  Bob checked the on-line log this morning; and yep, we’re both in there. Sweet – a new DXCC entity for both of us!

Then today, I got some time this afternoon behind the dial and got two more new DXCC entities, and these I worked at QRP power.  15 Meters was hopping and netted me UN3M in Kazakhstan, as well as RI1FJ in Franz Josef Land.  The pile ups in these two instances were very small, so I tried QRP from the get-go here and was richly rewarded in both instances.  When the competition is not so fierce, you can afford to “be a purist”.

There was another station that I worked on 15 Meters that caught my ear, as it was a long and strange call sign – LZ1876SMB.  I have worked Bulgaria many times with QRP, but this was a Special Event Station to commemorate the Bulgarian Saint Martyrs of Batak.  A little Googling revealed that these were 700 members of the Bulgarian Orthodox Church who were martyred for their faith in an uprising against Ottomans in 1876.

If you go on QRZ, you’ll find out that LZ1876SMB is just one of many stations that will be on the air commemorating the Bulgarian Saints. For us Stateside ops, if we work five of these different LZ Saints Stations, a very beautiful diploma can be earned. 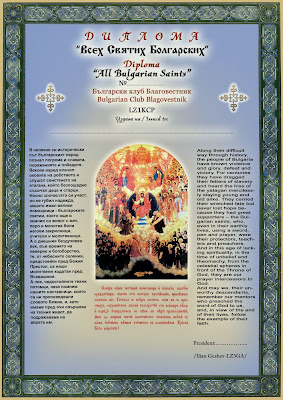 One down – four to go. I am going to keep my ears open for these stations. Bulgaria is usually (although not always) a fairly easy trip from NJ via QRP.

One Response to “The weekend”