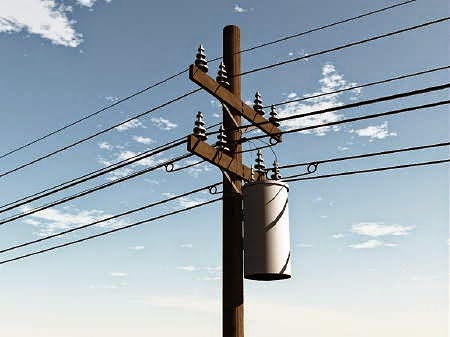 This past Friday, I had a very pleasant visit from Roy Charlesworth from B.C. Hydro. Roy is the Hydro's noise mitigation man for naughty power lines and made his way to Mayne Island on the morning ferry from the mainland.

For the past several years, I have been plagued with severe power line noise to my northwest, virtually killing my opportunity to take part in most 6m openings to Asia. The one or two small rain showers that we might get here in the Gulf Islands during the sporadic-E season, will often wash away enough of the power line crud to quieten things down for a few hours but as soon as the sun is back and the day heats-up, the noise always returns. For the same reason, the lines don't seem to get noisy until around 10 a.m., giving me some early-morning opportunity to listen to a dead-quiet band.

Earlier this spring, I contacted Roy and was added to his list of places to visit. He assured me that he would be over to check out my situation sometime during the summer. Roy is now officially 'retired' from Hydro and was doing similar noise mitigation work at that time. Once retired, Hydro found that his unique skills were still very much in demand and have rehired him on a 'work when you want' contract basis, allowing Hydro to still chip away at the list of complaints.

I recall, not too may years ago, when any complaints to B.C. Hydro about power line noise where just  ignored and the only way they would act was if ordered to do so by Industry Canada. With the confusing  bureaucratic channels involved, most amateurs just gave up and lived with the noise. Fast track to modern times, where all responsibility for noise mitigation has been placed in Hydro's hands and they are bound by IC mandate to deal with customer noise complaints.

It was apparent when first meeting Roy that he was very familiar with amateur radio 'noise problems' and very knowledgeable about their causes. After demonstrating the noise being heard on 6m on my own receiver, he then deployed a rather unique piece of test gear, a Radar Engineers Model 240 RFI Locator receiver. The 240 tunes from 1.8-1000MHz and is capable of displaying and saving the spectral display of the offending noise signal. 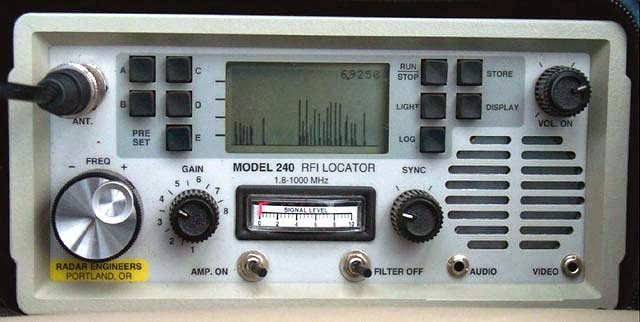 According to Roy, there are many possible causes of power line noise (cracked insulators, poor grounding, loose clamps... etc) and each one has a unique spectral signature. 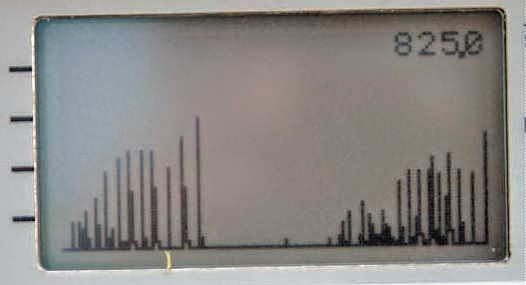 Being able to see the signature and compare it to the actual suspected source goes a long way in helping to find and cure the problem. Before departing to search the local area, Roy's final check was to check my own house for any possible noise. A quick sweep of the electrical service panel using yet another receiver indicated all was well.

Roy also mentioned that he prefers working with hams since, compared with non-ham noise complainants, they seem very knowledgeable about noise in general and often have narrowed down the source for him...even providing the number of the offending power pole. I had also provided Roy with the numbers of two different poles. I was pretty sure about my number-one candidate pole but not so sure about number-two. Using the sharper pattern of my 9 element 2m Yagi, I was able to get a very good bearing on the noise source.

After being gone for most of the afternoon, Roy returned to explain what he had found. To my delight, he had found three noisy poles within my local neighbourhood, but to my surprise, none were the poles I had suspected! All three however, were on the same bearing as my prime candidate pole, but much further away than I had thought. He also confirmed what I had told him earlier, that all other directions were very quiet. He explained that he would file his findings with Hydro who would create a work order for eventual physical inspection and (hopefully) resolution of the problem. He would also contact me again once that had been done, to see if the noisy poles had been fixed.

I think we are most fortunate, here in B.C., to have a dedicated one-man power line noise mitigation man, in the person of Roy Charlesworth. He is clearly passionate about his task and understands just how devastating power line noise can be for radio amateurs. Unlike many regions in the U.S. where utility companies can stonewall amateurs for years and years, we presently have a very efficient recourse when power lines behave badly.

I sure hope Roy doesn't retire for 'real' anytime soon as I'm not sure he would be easily replaced!