When I got home after my NA-034 operation, I wanted to try to understand what happened. I was sure that I’d operated solely off a car battery in the past and as long as I was connected directly to the battery I hadn’t had any problems. Based on some testing that I did, I discovered that I may have been mistaken. The short version is that I discovered that by using the battery in my car without the engine running, I was able to reproduce the “strange noise in headset” that I recently wrote about, and that by running the car engine, that problem went away. There’s a bit more to it though. Read on if you’re interested. 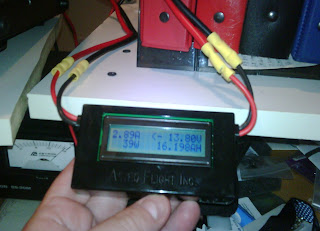 that it was drawing while the radio was transmitting. While I could do this with a couple of meters when I was home, based on some recommendations that I got from W3FF, K8EAB, and NE1RD, I picked up a Super Whattmeter from Astroflight for around $50 plus shipping. These devices are used by folks who fly electric model airplanes because you really don’t want your battery to die when it’s up in the air. As it turns out, they are well-suited for monitoring your power when operating portable. Of course, they work fine too in the home shack, though my power supply has meters so it’s not needed. The picture here shows it hooked up that way for testing, and you can see that the Astron supply is supplying 13.8v.

As a side note, I started using quick-disconnect connectors made by Workman Electronic quite a number of years ago, before Anderson Powerpoles became popular. I was looking for some kind of quick disconnect power connector and found patch cables similar to the ones in the picture at a hamfest. I typically cut them in half and crimp them onto whatever I need to, be it battery clamps, the power cord for a radio, and so on. The good part is that I’ve been able to find them surplus at hamfests (though I’ve seen from a number of places online that they are now discontinued) but the bad news is that they don’t match what most other folks use. I keep meaning to make myself a set of adapters to connect to Powerpoles.

I crimped a set of the quick disconnects onto the Whattmeter and did a test with the power supply and radio in the shack to ensure that the meter was working and found that it worked perfectly. The shack power supply was putting out just over 13.8 volts with the Icom 756 Pro II drawing around 3 amps while receiving. (Interestingly, this is about 0.6A below what the ARRL reported in their testing, but I’ve had some repair work done on the radio and it’s possible that some of the newer components draw less than the originals.) The next step was to reproduce what I’d set up while in Florida.

As luck would have it, the weather was beautiful this weekend, and as we had no plans on Sunday, I took the 706, the Buddistick, the Whattmeter, the antenna analyzer, and a length of coax outside. I set up the Buddistick on the front lawn (I just had it on the mini-tripod sitting on the lawn, though I did put the radial over a couple of plastic lawn chairs to keep it off the ground) which while not optimal for DX, took me all of 5 minutes to set up with a good match to the radio, as verified by the antenna analyzer. I connected the radio to the antenna then connected the power cables to the car battery, with the Whattmeter in-line. My thoughts were to do a few tests with the engine off, fully expecting that I wouldn’t have any issues, then turn the engine on to see what kind of difference it made. I found an empty frequency on 20m and started testing. As soon as I transmitted, without looking at the meter, I knew that, to my surprise, I’d reproduced the problem: That nasty noise in the headphones was back.

What I figured I’d do was to collect data using various levels of transmit power to see the effect on the voltage and current draw. The meter itself also shows power in watts, though of course that’s trivial to calculate if you already have current and voltage. (From Ohm’s law, P=I×E). I quickly discovered that the car battery wasn’t able to supply sufficient voltage unless I was transmitting with about 10 watts or less. The specification for the 706 MkIIG is that it requires 13.8vdc ± 15% meaning the minimum allowable voltage is 11.73vdc. With the car engine turned off, I measured 11.68v with the radio drawing 5.79A when transmitting using 10w. At 40w (the next step I measured; when I was in Florida I was able to “get away” with 40w when testing with KH6ITY), I measured 11.52v while drawing 8.23A.  At 60w transmit power and up, the voltage dropped to about 11.4v but the radio was simply unable to draw the current needed. 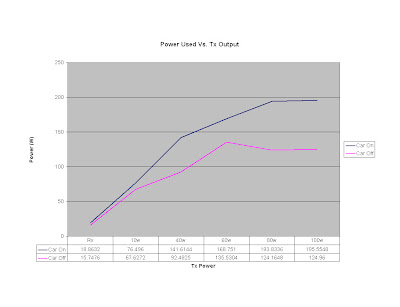 With the car running, it was a completely different situation. Even at full transmit power (100w), the voltage supplied to the radio was 13.24volts at 14.77A. (I’m not sure why my current draw measurement at that power was different from the specifications for the radio, which were also pretty close to what the ARRL measured). I took the results and plotted it out in transmit power vs. watts consumed for both the case with the engine on and the engine off, and it’s pretty clear that with the engine off, the battery simply isn’t able to supply the required power. (You may need to click on that chart to have it display in a readable size. If you’re reading this via email and that doesn’t work for you, go to the web version of this post at k2dbk.blogspot.com and it should work from there.)

You can see from the chart that not only couldn’t the battery supply sufficient power for the transmit needs, it was only able to supply less as the radio tried to use more, presumably because the battery simply couldn’t “keep up”. So all my empirical testing seemed to prove that with the setup that I was using, I simply couldn’t operation at full power using just a car battery with the engine running.

However, similar to bees who simply don’t know that they can’t fly, so they do, apparently my radio didn’t know that it didn’t have enough power to operate, at least during my 2004 and 2006 operations from NA-034, so it worked just fine. During those operations I know that I did not have the car running, yet I had no issues with power. The key for me know will be to find out what has changed. I am using the same power cables and the same radio (the antenna was different, but that shouldn’t matter), yet something has changed. The next thing I am going to do is to see if perhaps there is a problem with the power cables that may have occurred over the years.

Although I attempted to measure the resistance in the power cables and came up with a measured 0.1 Ohms, my meter is probably fairly inaccurate at such low resistance, so I did a calculation instead assuming that I’ve got all 12 AWG wire in place. (Part of it is actually 10AWG, but I’m using 12 to account for any losses due to connectors and splices.) Using a 12v supply with a load of 15A (matching what I saw when the engine was running) and a length of 20 feet, the voltage drop calculator that I used shows an estimated voltage drop of around 8%. Allowing a bit of wiggle room for the length, it appears that the voltage drop would be somewhere between around 6% and 10% which corresponds to a voltage at the load (radio) of between 11.3v and 10.8v. Even the highest end of that range is too low for the radio to operate properly. Dropping the transmit power to 40w results in the voltage to the radio of about 11.5v which is a bit below spec but probably would allow operation, with some minor distortion. That seems to match what I had experienced.

The other factor that I haven’t played around with much is temperature, and I’ll leave that as an exercise for the reader. At this point, I think the best thing to do is to shorten the power cable as much as I reasonably can, replacing the section that is currently 12AWG wire with 10AWG wire. I suspect that will help ensure sufficient current flow while minimizing voltage drop.

I would be very interested in any feedback from anyone who can shed a bit more light on these issues, as I know that there are other factors that may come into play, such as the battery chemistry and perhaps other parts of the car’s electrical system.