The battery charger that wasn’t

I’ve bought loads of radio and electronic stuff from Hong Kong and China on eBay and most of it has been okay. But I’ve had the occasional duff purchase, like the stubby dual band antenna allegedly made by Diamond which I’m pretty sure was a fake. 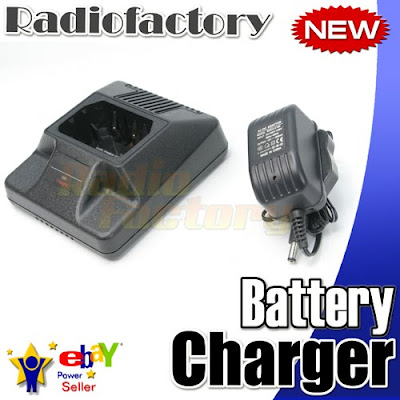 I bought a Motorola GP300 radio body at the Blackpool rally a couple of weeks ago but I needed accessories like a battery pack, charger and speaker mic. Ebay was the obvious place to look for them. The 1800mAH NiMH battery pack was fine, and a good price. The speaker mic is obviously a clone of the original Motorola design but a lot less solidly made, but I have received good audio reports using it so no complaints there. However I was a bit suspicious about the “overnight charger” purchased from RadioFactory because after 6 hours of charging the battery pack was really hot.

The GP300 battery ran out while I was on Watch Hill this afternoon so I need to charge it back up, but before I do I thought I would take a look inside. The case is conveniently designed so that you can pull it apart after pushing back four flexible plastic clips. The circuit board then just lifts out. I got quite a surprise after I did! 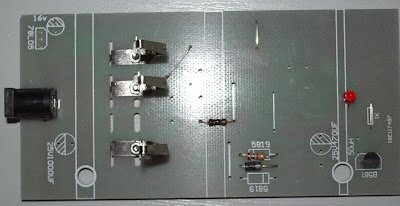 The top of the circuit board is printed with component outlines but most of the components marked are not present, and many of the components that are there don’t correspond with the outlines. In the middle of the board is an unidentified component that looks as if it has overheated. 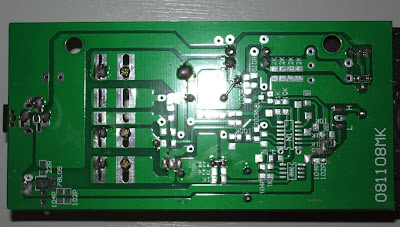 On the underside of the board, again, most of the components that are supposed to be there are missing. Some of the tracks are bridged together with solder blobs or a wire link. I haven’t got the time or, more importantly, the clarity of mind to work out exactly what the circuit on the board actually is, but it doesn’t look much like something capable of charging a 7.2V battery pack from a 12V wall wart.

I’m not quite sure what to do about this. I have the plastic case and the charger contacts, which as I know from the charger I made for the TH-205E are the hardest parts of a battery charger to make. So I could simply make up another constant current charger circuit on Veroboard and put it into the existing case. Or I could simply cut my losses and buy another Motorola charger from a reputable source. I’m sure that one of my readers will know of one.