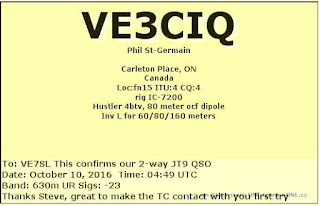 The 630m band continues to provide interesting challenges for Canadian amateurs ... be they antenna, equipment or propagation related.


Sunday night produced another flurry of excitement on the new band, further demonstrating its potential for small stations operating from the suburbs.

On Sunday evening, VE3CIQ in Carleton Place, Ontario (southwest of Ottawa), and I, completed a two-way JT9 contact, following a short exchange of the required information (and more) just after midnight, Ontario time.


Noting the increased east-west favorability over the past few nights, Phil and I decided to give it a shot and were delighted to cover the 2200 mile / 3500km path while Murphy was sleeping and not messing with propagation.

Rather than randomly beacon on JT9, we both set 'calling each other' messages. Although this continued for some time, the QSO only took 12 minutes to complete once I started to decode Phil's signal out west. He had been decoding me and sending signal reports for a long time before his signal eventually peaked up here for the evening. I suspect that we could have continued the contact for the remainder of the night as his signal was getting stronger and stronger as we worked.

Following our QSO, Phil sent me some information about his station. His transmitter consists of a Yaesu FT-817 driving an XKA transverter which in turn drives his homebuilt class-E amplifier. The amp consists of three switching FETs in parallel, operating at 24V and produces about 175W out.


Phil's antenna is an 'inverted-L' style ... 45' up to the top of a Pine tree and then a very very long sloping top hat wire, folded back on itself three times, in a zig-zag pattern. This use of linear-loading allows him to squeeze a near full 1/4 wave antenna into his suburban lot as well as to reduce the size of his loading coil inductance. His ground system consists of ~3,000' of buried radials. By all accounts, it seems to perform very well as his WSPR beacon was recently heard in Hawaii! 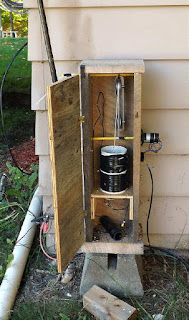 Phil's station stands as yet another fine example of those living in the suburbs without a lot of room for antennas yet still able to successfully operate and explore our new 630m band. With a little ham-radio creativity, it's surprising how well a small station can perform, especially when the propagation co-operates.


Following our contact, I moved back to the WSPR section of the band and continued beaconing overnight.


Apparently Phil and I picked a good evening to run a sked as the overnight WSPR map shows it to have been the best night of the new DX season so far, with forty-four individual stations reporting my signal via the WSPRnet website.

Interest and activity on 630m continues to grow nightly, now that the DX season has arrived and the reality of a 630m ham band for U.S. amateurs grows ever closer.
Please support our generous sponsors who make AmateurRadio.com possible: