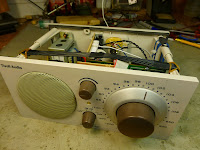 The Model One has been a huge success. But in many ways it is a daring retro design judging from all the features that are missing in this radio. I am thinking of features such as a customizable equalizer, a digital display, and memory presets. It just has a plain old analog tuning dial for FM and AM.

The radio could as far as I can tell just as well have been made in the 70’s except for some of the IC’s which are used. Actually it is easy to see the similarity with the even older KLH Model 18 from the 60’s, and yes – Henry Kloss played a role in both radio designs. But that makes for easy repairs, such as a seemingly common fault in the FM tuning capacitor, which over time may develop contact problems.

The radio is in many respects exceptionally well made. The tuning dial has a quality vernier drive. The audio section is well built with a powerful amplifier, a strong magnet for the loudspeaker, and a bass port design for the wooden cabinet. All are factors which contribute to its reputation for good audio. If one can trust measurements on the web, it has been equalized for enhanced bass and treble with the mid’s some 6 dB down. These are well-known tricks for getting a warm and crisp sound with universal appeal. Internally the tuner section, which is built around the TEA5711T chip, is well shielded for frequency stability as seen in image 2. 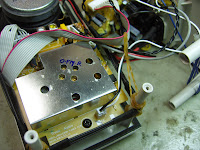 One weakness which manifested itself after only 3-4 years in this particular radio is that it became hard to tune, scratchy, and unstable on FM due to intermittent contacts in the tuning capacitor. According to the TEA5711T datasheet it is a varicon which for AM has 140/82 pF, for FM 2 x 20 pF, and for trimmers 4 x 8 pF. This particular unit had a Mitsumi varicon. Some say, when this fault occurs, that the varicon must be replaced and others say it can be cleaned. Who do you think I sided with?

Disassembling the radio is quite straightforward if you are used to this kind of work. The tuner is enclosed in shielding on both sides of the PCB. The shields can carefully be desoldered as shown in image 3. That exposes the varicon, and its plastic casing can be lifted as shown in the last image. 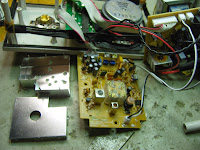 I sprayed it with contact spray and the radio came back to life. The only problem was that the tuning on FM had shifted so that a station on 100 MHz now appeared on 107 MHz. A little detective work around the circuit showed which trimmer that was for the FM oscillator and which one that was for the FM RF circuit (marked O and R in image 2). Since the oscillator trimmer was set for its maximum capacitance with the plates covering each other, it was easy to reduce the value and get the FM dial back to normal again, and then to peak the RF trimmer.

It got me wondering though to see that it had been necessary in the first place to have the oscillator trimmer set at its maximum value. It was just as if the tuning capacitor never had had its full value, even in the factory, and that it finally got it after my cleaning.