I had mentioned that I was going to be offering the “QRP – Do More With Less” blog up to guest bloggers. Here’s the first!  This post is in response to an e-mail that I received from Steve K8SAR. He had sent me an e-mail about his visit to the Memphis Belle.

I thought this was too cool to keep to myself, so I asked Steve to write something up.  Here’s the story of his adventure in his own words:

Larry,  I thought you’d be interested.  The Memphis Bell was in our town over the weekend with a friend who was one of their volunteer pilots.  I had the chance to get a tour of the fighting lady including the radio station on board. I doubt they’re functional but they are indeed very interesting! 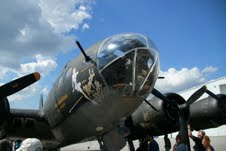 There are a number of B-17 “Flying Fortresses” from WW II still in the air.  I believe currently 4 of them are owned and flown by nonprofit organizations dedicated to their preservation. During the summer months they can be found traveling to various cities offering rides (in the range of $3-500 for a  40 minute trip) to wanna be crew members.  The Memphis Bell is one of those “birds” traveling this summer and visited central Ohio over the past weekend.
The ground crews and pilots are generally retired and give of their time for the love of aviation and history. A friend was one of those pilots.   I was offered the opportunity to tour the aircraft following the daily flights. See cockpit photo. 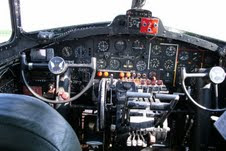 My pilot friend was a top gun fighter pilot of the Viet Nam era who then went to work for Delta as a pilot, eventually heading up their pilots. He has since retired from Delta. We met when he and his family relocated to central Ohio, where he began his own air operations consulting firm.  Forever an advocate for the industry he had the opportunity to be on one of the B-17s.
They arrive on Fridays at the host city, do the rides on Saturday and Sunday then fly the plane to the next city on Monday where they do media rides to promote the “rides for a fee” the following weekend.  Typically the plane is left in the new city all week to build up interest.
Maintaining a 60-70 year old bomber isn’t cheap, so over the course of 2 days they will conduct 5-8 rides a day with up to 9″paying crew members” at around $400-500 each (pilots and crew just get expenses as volunteers).  Additionallly they have a trailer selling videos, hats, shirts etc.  As a nonprofit they also receive tax deductible donations.
When he knew that Columbus, OH was on the schedule, having lived here briefly, he volunteered to do the weekend (he volunteers one weekend a month), He e-mailed me a few months back and we hooked up while he was here. 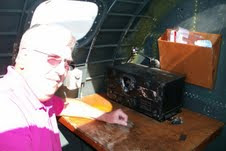 I found most interesting the radio desk, located right behind the bomb bay and right in front of the two side mounted 50 caliber machine guns.  While the radio gear was nonfunctioning it did appear to be from the era. At the desk photo I am seated in front of a 3.5-6.0mhz transceiver (note the Morse key!).  Right behind the radioman’s seat is a second set of HF gear. I would have liked a little more time to study the rigs in some detail. The experience gave me a whole new appreciation for those men who, averaged 22 years of age, were piloting missions after just 167 hours of training. 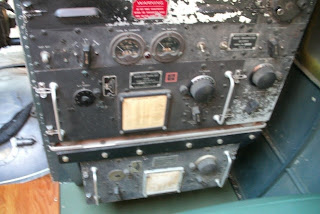 Thanks Steve, for sharing your story!
A few facts about the Memphis Belle:
The aircraft was one of the first B-17 United States Army Air Corps heavy bombers to complete 25 combat missions with her crew intact.
The aircraft was the namesake of pilot Robert K. Morgan’s sweetheart, Margaret Polk, a resident of Memphis, Tennessee.
The aircraft was a Boeing-built B-17F-10-BO, USAAC Serial No. 41-24485, was added to the USAAC inventory on 15 July 1942.
She deployed to Prestwick, Scotland, on 30 September 1942, to a temporary base at RAF Kimbolton on 1 October, and then to her permanent base at Bassingbourn, England, on 14 October 1942.
Here’s a few more pictures of the Belle, courtesy of Bob W3BBO, who took these when the famous aircraft was visiting Erie, PA. 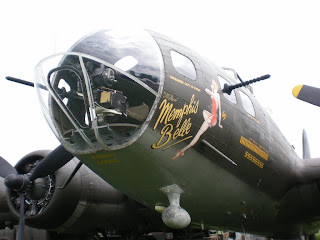 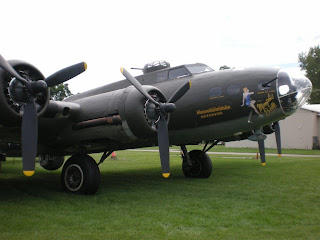 Indeed, the military had a lot of fine radiomen throughout the years.  A lot were Hams that went in to serve; but also, a lot of men and women went into our Armed Forces, were bitten by the radio bug during their tour of duty, and then became fine Amateur Radio ops after their time of service to our country ended.
A good history of Amateur Radio and World War II can be found at: http://tinyurl.com/kdw5onr
Also, the “Golden Era” of Amateur Radio came about to be, largely due to the glut of surplus military electronics that became available after WWII.  In fact, if there had been no glut of parts and pieces, there probably wouldn’t have ever been a Heathkit!
72 de Larry W2LJ
QRP – When you care to send the very least!
Please support our generous sponsors who make AmateurRadio.com possible: