Another portable test of the BLT+ tuner

I took the BLT+ balanced line tuner out to the Excalibur antenna site to try it out on the doublet antenna that we put up last Saturday.  This was the first test of that antenna (40m and 80m using a common feedpoint).
I didn't have much time today and after the first QSO it started to rain so I packed up and left before getting as much documented as I would have liked.  I apologize for not recording the actual tuning process and the subsequent QSO.
I had the KX3 operating using its internal batteries and outputting 2w. I was running 2 watts because that is the most efficient PA mode for the KX3.

I used the BLT+ to tune the 40m/80m doublet.  Balanced line antennas perform better with a tuner designed for balanced line and this was a good test for both the tuner and the new antenna.
I quickly matched the doublet using the BLT+ using the lowest impedance setting which is also the most efficient.  I was glad to see that the BLT SWR LED indicator is bright enough to be seen in direct sunlight.  I was wondering about that but you can definitely tell when it dims even in direct sunlight.

After quickly tuning up I sent my call two times and was promptly answered.  The other station was running a Flex 6500 into a KPA500 and a OCF Windom at 50 feet.
He reported me as 559, while he was a 599.  He was running a new KPA500 amp at 500w so we were a bit mismatched on power.
Interestingly the difference in 2w and 500w exactly matches the 4 S-Unit difference in our reports if you do the math (each increase in an S-unit requires quadruple the power).

AA4OO sitting back and listening to the QSO

Paul AA4XX kindly snapped some pictures while I was listening to the other operator.  This is the Excalibur antenna site but the shack is outside the photo.

The Doublet's feed line has not been brought to the shack yet so I was just sitting under the antenna.  The open feed line is running along the ground for a bit which certainly didn't help the signal but we haven't installed the posts to carry the feed line over to the shack and I was too lazy to move the chairs far enough away to keep the feed line in the air.

In the foreground is some saw-grass common on the NC coast.  I'm not sure why it's growing this far inland.

Here is a brief video showing how the BLT+ is connected to the Doublet...

The little BLT+ performed great with both balanced line antennas I've tried.  It is easy to use and allows me to use my KX3 with balanced feed line antennas now.  I encourage you to build the kit from Pacific Antenna / QRPKits.com .
That's all for now
So lower your power and raise your expectations
72/73
Richard, AA4OO

I will have a BLT please

I was looking for a QRP tuner for the 1Watter 40m transceiver I am building that would work with both balanced feedline antennas as well as coax feedline.  The traditional Z-Match tuner is quite efficient at tuning balanced line antennas and the built-in SWR bridge gives you an all-in-one tuner and SWR indicator without having to take a separate SWR meter along with its inherent mess of cabling a separate SWR meter.  The BLT in the name stands for "Balanced Line Tuner".
This tuner kit is available from the fine folks at Pacific Antenna.

The kit comes with everything you need except for hookup wire and your soldering equipment. Instructions are downloaded from the qrpkits website.

Here are some advantages that the Z-match design offers:

Matching balanced line fed antennas is sometimes problematic for a traditional balun and tuner as the antenna can present impedances that are far outside of the balun's design.  The Z-Match uses a center tapped coil to keep the complex impedance balanced across the inductor (at least that's how I understand it).  I have measured my Elecraft BL2 balun getting appreciably warm at QRP levels when connected to my doublet indicating loss I'd prefer to avoid.  The Z-Match design supposedly results in less loss.

The BLT plus includes a Dan Tayloe N7VE LED SWR indicator which eliminates the need to carry a separate SWR meter.  The concept is beautiful. The SWR bridge is switched into "Tune" mode and presents a 50 Ohm impedance to your transmitter while you are tuning so that you don't risk damaging sensitive home-brew finals.  The LED lights when the SWR is too high and dims and then goes out as the match is made.  It is simple and fast to use.   The instructions for the bridge are not with the BLT instructions. Download them from this link.

The kit is relatively easy to build with one tapped toroid to wind for the SWR bridge and one 3 winding toroid for the tuner.  I faced a few issues that you might avoid:
The SWR bridge instructions are separate from the kit instructions and simply googling them will give you instructions for an older version.  Use the version here.
My tuner toroid ended up being a bit messier than I'd like because I had to rewind it and my resulting leads aren't as short as they could be.  I may go back and trim the leads to make it tidier but my least favorite part of winding toroids is heat stripping the insulated magnet wire so I'll probably leave it as is.  Initial tests indicate it's working great. 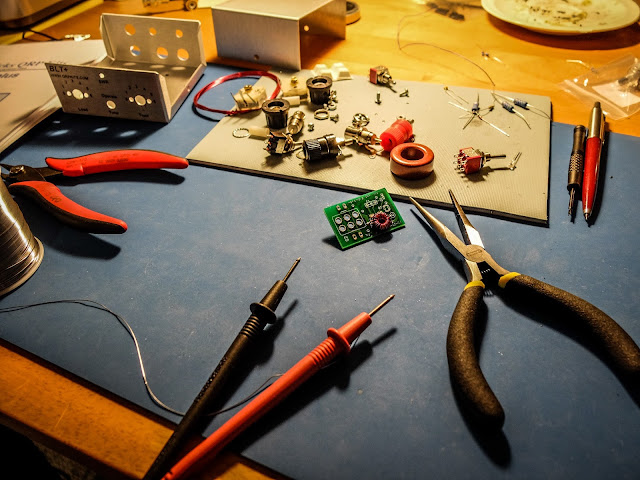 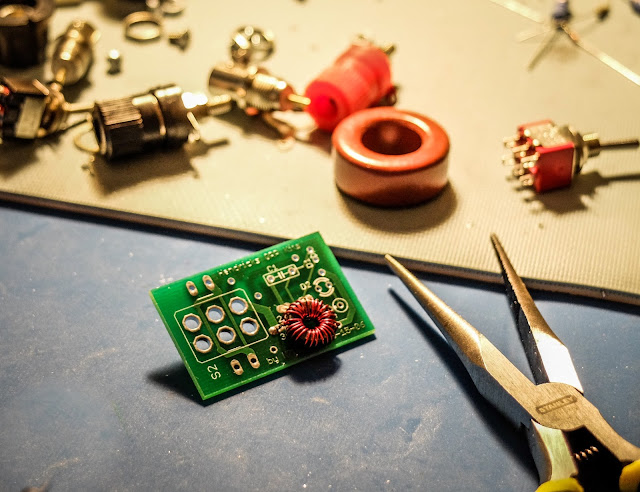 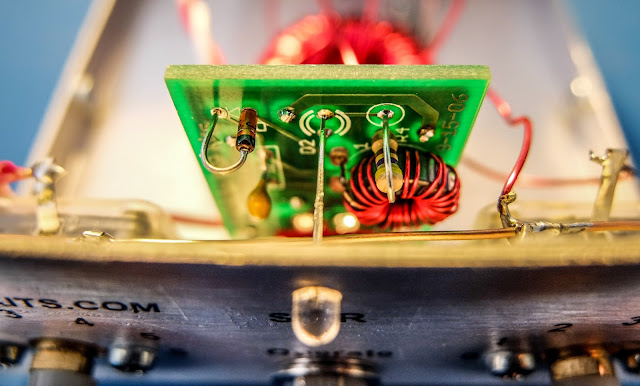 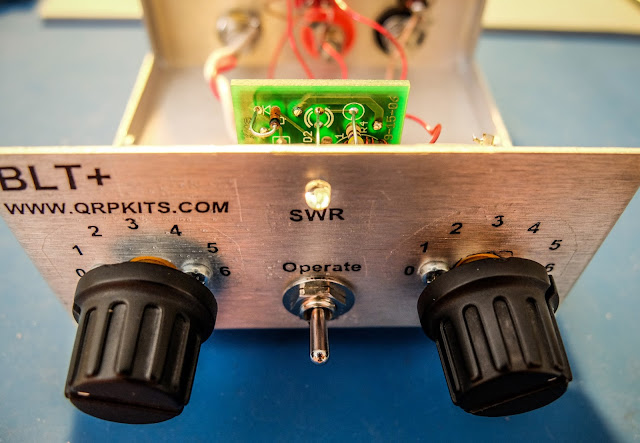 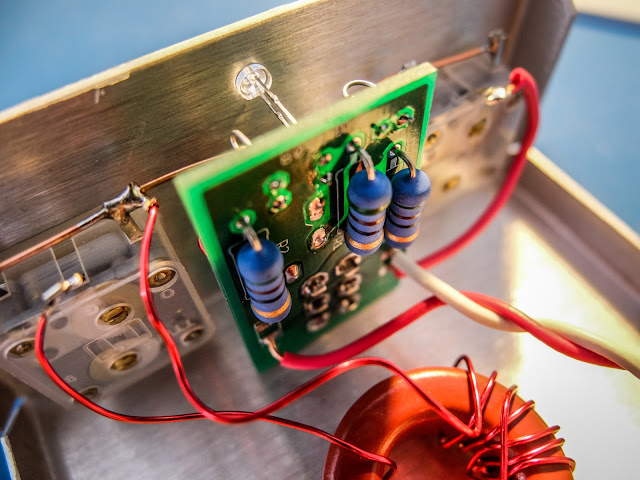 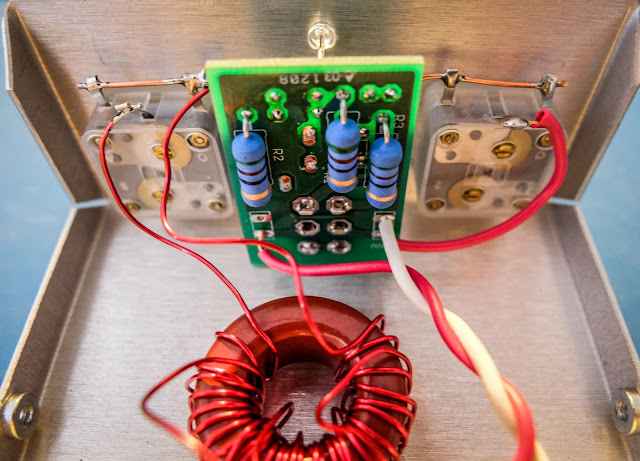 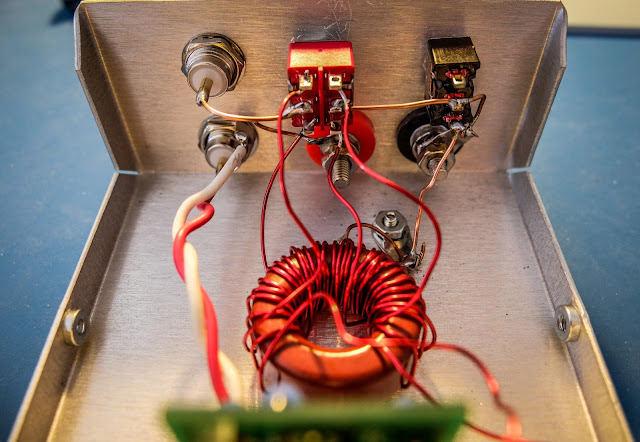 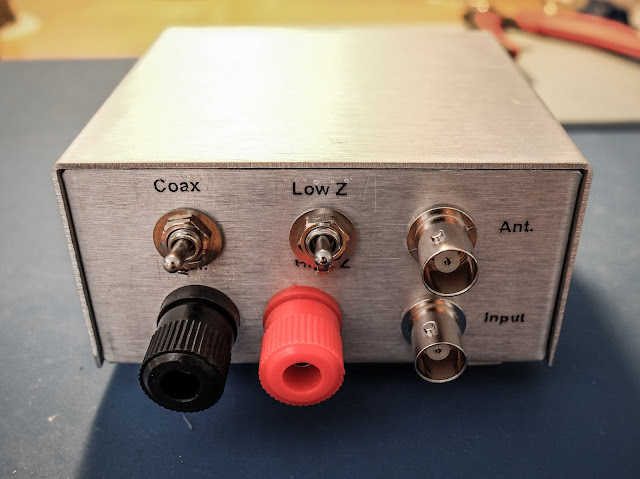 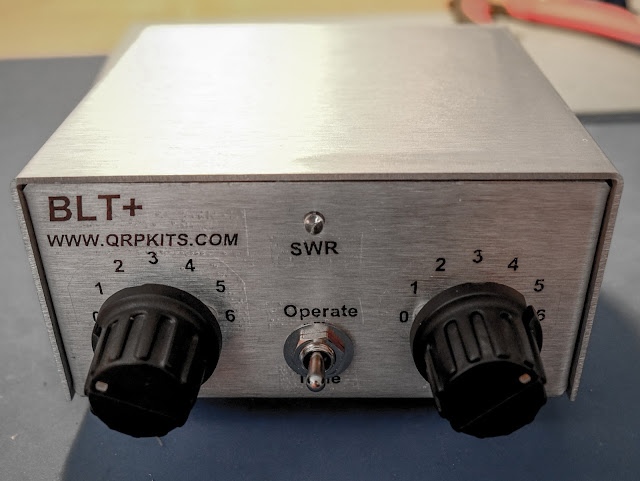 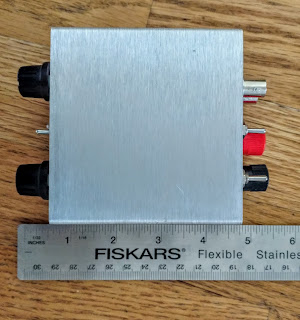 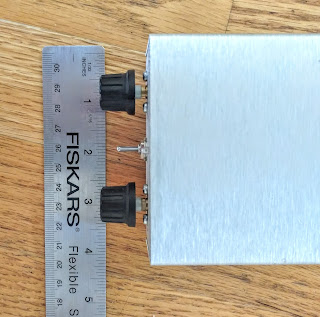 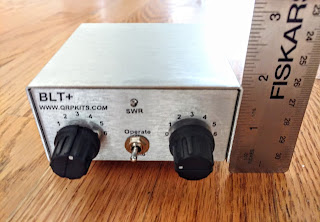 Qrpkits offers a great little kit that results in a commercial looking product. You end up with a small portable tuner plus SWR indicator that reduces the complexity of your portable operation.  Pacific Antenna is very responsive to questions. I sent a question concerning the incorrect instructions I'd downloaded for the antenna bridge and James answered me the same day with a different link (included above).
So if you have a QRP radio that needs an antenna tuner I recommend this kit. It's well thought out and works well.
That's all for now
So lower your power and raise your expectations
72/73
Richard, AA4OO
Please support our generous sponsors who make AmateurRadio.com possible: