The simplest possible AM transmitter 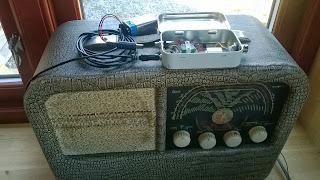 Here’s a design for a 1 MHz amplitude modulated (AM) transmitter. I’ve been looking a while for something like this, a simple short range AM transmitter for the medium wave band, as I needed something for demonstration of my collection of old radios.

The result is the AM transmitter shown here in an Altoids tin on top of a Radionette Kurér radio. This is a portable tube radio from the 1950’s. Several hundred thousands were produced, and it was exported from Norway to 60 countries. It is still popular among collectors.

The transmitter is as simple as it gets. The heart of it is a 1 MHz crystal oscillator in a can. Its 5 Volt power is modulated via an audio transformer, one taken from the output of a transistor amplifier (primary 147 ohms – secondary 3 ohms). I drive the modulator from my cell phone into the low resistance side of the transformer and get good audio when the phone’s volume is set to maximum.

The design was inspired by one from Instructables, but mine also has a 78L05 5 Volt voltage regulator and a red LED in series with the power supply. It indicates that the battery is plugged in. In total the transmitter draws 4.4 mA at 9 Volts. The input power to the oscillator is less than 5 Volts * 4.4 mA or in the order of 20 mW. The power output is just a fraction of that. I have tested it with a 1.5 m wire hanging down behind the built-in frame antenna in the back of the radio with good results.

This is really just a modulated marker transmitter as I have briefly described on this blog before, and the square wave will have harmonics of 1 MHz over the entire short wave band. Some of these frequencies may propagate really well, so if used with a longer antenna, it should really have an output low pass filter to prevent that.

I’m not totally happy with this design, despite its simplicity, though. If I could, I would rather like to transmit in the long wave band at 216 kHz. This is the old frequency of the Oslo transmitter which ceased operation in 1995. As a member of the Norwegian Radio Historical Society, I am allowed to use that frequency with a transmitter input of 0.5 W for demonstration purposes.

For other frequencies, one simple alternative is a standard canned oscillator at 1.288 MHz. I also believe some of the Silicon Labs oscillators can be used in order to get an adjustable frequency, but I haven’t tried that myself.

But until I find a suitable frequency source at 216 kHz, I’ll stay with the 1 MHz alternative at a mere 20 mW. It is in line with the best principles of KISS (keep it simple stupid) or with Occam’s principle : “It is vain to do with more what can be done with less“, i.e. the QRP philosophy.