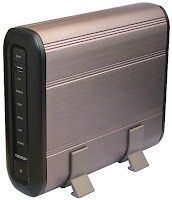 I was tuning around the top end of 10m yesterday and noticed a lot of strong bubbly warbly noises, the unmistakable sound of switched mode power supply interference. It didn’t take long to track this down to the power supply for my QNAP TS-109 Turbo Station.

The TS-109 is a network attached storage device. But it is actually a small computer with a big hard drive, running Linux. I use it mainly as a backup drive for all our PCs, but it also hosts the shared documents folder so that we can easily exchange files from one computer to another. It runs a script that updates DynDNS when our IP address changes, which it does quite often at the moment. I could even run a web server on it if I wanted. So it really needs to run all the time. But the amount of interference it produces isn’t acceptable. I tried adding some clamp-on ferrite suppressors but they didn’t make much of a difference.

The power supply for this device is a plug mounted switched mode supply rated at 12V 3A. This is probably over-generous as the specification for the TS-109 gives the power consumption as 14.4W in operation. There are plenty of alternative 12V switched mode supplies available but I have no way of telling whether they would be better or worse than the manufacturer-supplied one as regards RF interference.

The only transformer based power supplies capable of supplying this sort of power are CB radio power supplies such as those sold by Maplin which have a 13.8V DC output. QNAP doesn’t, unfortunately, specify a voltage range for the Turbo Station so I don’t know if this higher voltage would be permissible. It would be very convenient if I could use the power supply I made for my QRP K2, which these days just keeps the K2’s battery charged up, but the output from that is 14.2V.

Switched mode power supplies really are the bane of the radio amateur’s life. I don’t know how to solve this problem at the moment, except to switch off the TS-109, which is inconvenient.