I’ve been thinking about activating Ormes Peak (W0C/FR-052) for a while now. It is not too difficult to get to and is not a difficult climb. After the Waldo Canyon fire (2012), the area was closed for several years, so I needed to be patient. Then I noticed that Don KØDRJ put an alert on SOTAwatch indicating that he was going to activate the summit, so I gave a listen on 146.52 MHz. Sure enough, around mid-morning I heard Don on the frequency and worked him without any problem from my home location.

Then I got to thinking. Joyce KØJJW and I had talked about going for a walk this afternoon, so I did a little checking on Ormes Peak and concluded that it was an option. My fractured ankle is still on the mend so I am not back to 100% of my hiking ability. Ormes seemed like a good next step that would keep me progressing. 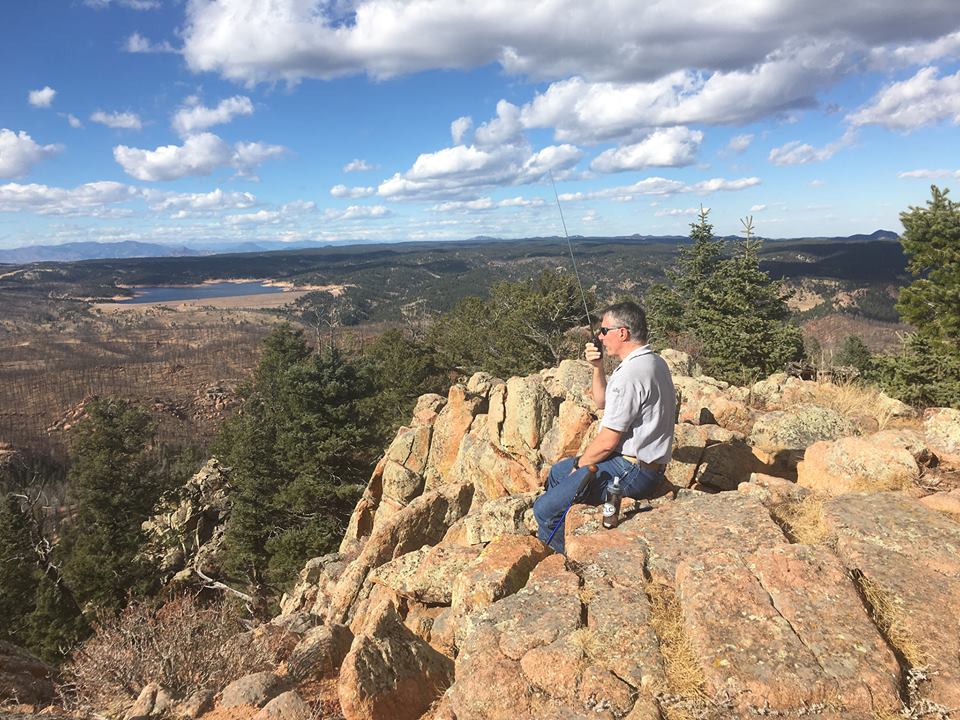 We hopped in the Jeep and headed to Rampart Range. To get to Ormes Peak, take USFS road 300 from the north (which is what we did, via Mount Herman Road) or from the south via Garden of the Gods. You’ll want to have a Pike National Forest map for this trip. 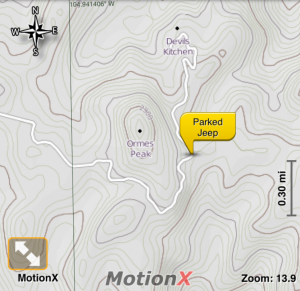 Turn East onto USFS road 303 and then follow USFS 302 (these roads are easy 4WD, probably OK for high clearance 2WD). These roads go through the Waldo burn area so you see what a burned forest looks like. Ormes Peak was not directly affected by the fire but we did see a few burned trees on the mountain. According to the Summit Post info, the best approach is from the south but we continued on around to the east and parked at the marked parking area here: 38.948680 deg N, 104.929677 deg W. From there, we bushwacked westward up the side of the hill without too much trouble (about half a mile and 600 feet vertical).

Once on top, I started calling on 146.52 MHz using the FT-1D handheld transceiver. I assembled my 2m yagi antenna hoping to work Brad WA6MM headed up Mt Antero but I found out later he did not summit. We had excellent visibility in all directions: great view of Pikes Peak to the south, Mt Yale and a sliver of Mt Princeton to the west and Mt Evans to the northwest. This really is a great spot to just sit and enjoy the view.

After making 7 contacts on 2m fm, we packed up the gear and headed down the mountain. Ormes Peak is a good “close in” summit accessible from Colorado Springs area.