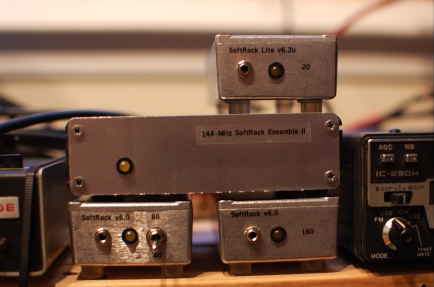 Finally got all of the SoftRock downconverters here enclosed and repaired.  Turns out I managed to cross two of the wires on the input transformer of my 20-meter v6.2 Lite (“upgraded” variant).  Once I found that, it sprung to life.  The other project was getting the 144-MHz Ensemble II VHF into an enclosure.  This has been a long-standing struggle since the nearest size diecast box is just a hair too small.  So, I put it into an extruded aluminum enclosure I found at Dayton a few years ago.  Unfortunately, I had to make my own front and rear panels.  But, I had an old minibox that was perfect for the donor material.

I should have polished the edges of the front and rear panels, but it’s not too bad.  KK7B opined in a QST article many years ago that after homebrewing “about 50 enclosures, they start to look respectable.” 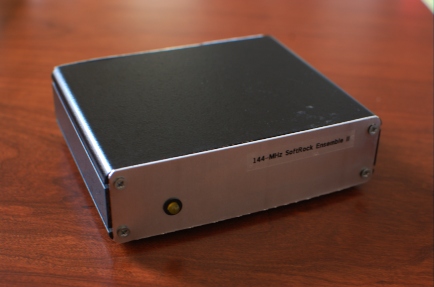 Holes were punched with a hand punch from Harbor Freight.  Given the cost of the Roper-Whitney equivalent and for as much as I will use it, this is perfectly acceptable.  There’s nothing like having the right tool for the job!  However, mine came with two 5/16-inch punches (no 1/4-inch), but one each 1/4-inch and 5/16-inch die.  Ooops.  VFBBYQC.  So, I had to drill the 1/4-inch LED hole.  A nibbling tool made quick work of the USB cut-out.  I cut the panels with hand shears.  So, I guess it should be clear what’s next on my sheetmetal shopping list… 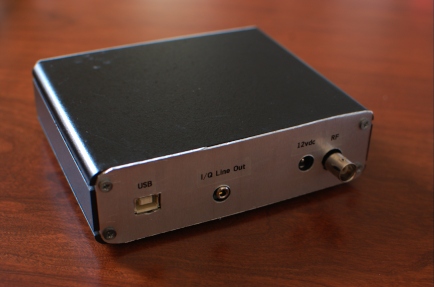 Now, I need to actually play with some “real” SDR instead of just diddling around with Rocky (which is very capable).  I’m running it under Windows XP on a 1.3 GHz Pentium IV with 1 GB of RAM.  The sound card is a Creative Labs Audigy 2 ZS.  There is a little latency when running a large waterfall and resizing windows, but it’s adequate for tinkering.  Eventually, I’d like to try some of the GNU/Linux SDR engines.  But, I’m just going to wait until a new (to me) computer falls into my lap before that happens.