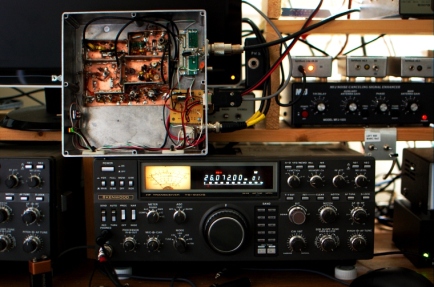 I recently resurrected the 50-MHz transverter project and have made good headway getting it working.  On Friday night, I began the process of tapping holes in the PA module heat spreader.  But, despite using plenty of “cutting fluid” (3-in-1 oil), I managed to break a (well-used) tap on the first hole.  Since the maximum (linear) power out of the driver stage is 200 mW, I embraced my inner QRPer and put the PA project aside to give the transverter a try in the CQ WW VHF contest.

The 6-meter Yagi had come down in favor of Yagis for 222 and 432 when the loaner FT-736R showed up.  So, I scampered up onto the roof and moved Yagis around.  I had hoped that this moment would be accompanied by changing out RG-8 coax for LMR-600 and LDF4-50A that are taking up space in the shop and shack.  But, I was not ready to commit to cutting that and I still don’t have LMR-600UF for the rotator loops.  Plus, I should replace the rotator at the same time.  That amounted to too much work for the available time.  I really just need to bite the bullet and install a rotating mast for the VHF antennas that’s not so precarious.

Got everything hooked up late on Saturday afternoon, but had to tend to some domestic concerns and was QRT until later in the evening when I heard my neighbor W4EE calling CQ on six SSB.  Did not know that he had six!  Apparently, this is a new thing for him, too.  He was surprised that I didn’t vibrate his radio off the desk like I usually do!  Told him I was running 200 mW and everything made sense.

Ended up working a few other locals on Sunday including N3UM, who moved me from 6-meter CW to 2-meter SSB for a quick chat.  He just completed the N1DPM active bias mod to his Mirage B2518G, so was eager for an audio report.  Sounds good!  He said my B3016G sounded good on-frequency, but I haven’t gotten the mod actually inserted into mine yet.  Probably that Kenwood (TS-700S) audio making up for the amp’s inferiority…

Eventually, I will be posting more details on the circuit here.  This is one of those projects that I would not encourage anyone to duplicate as I have constructed it.  However, there may be useful features.

3 Responses to “Revisiting the 50-MHz Transverter”