Today I spent a couple of hours making some contacts using the Olivia digital mode. It isn’t the first time I have used the mode. I used it several years ago back when I used the MixW software. I seem to remember that it produced good copy even when using 5W from my K2, but it was hard to find other people to QSO with. But now there seems to be plenty of activity. Olivia even has its own website. 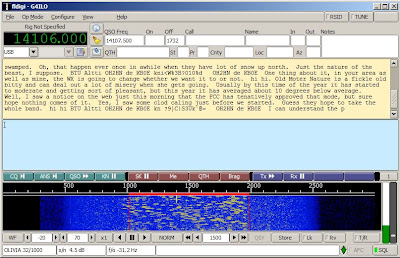 Although using Olivia is much the same as using PSK31, using the same software, it has quite a different feel. As with PSK there are different versions of Olivia. I was using Olivia 32/1000 which on 20m is normally found around 14.106MHz. This mode is 1kHz wide and operators use USB with the suppressed carrier frequency on an exact 1kHz multiple, e.g. 14.105, 14.106 or 14.107. The center frequency of the waterfall is set on 1500Hz, so the audio tones are generated between 1 and 2kHz, which is in the center of the passband with most radios. If you do this and your rig is accurately calibrated you should hear anyone who calls on that frequency without any need for re-tuning.

Olivia 32/1000 prints out slower than PSK31 which makes for nice relaxed contacts. People tend to chat using the keyboard instead of exchanging macros, though they may use a macro for the basics. Olivia uses forward error correction, so you may not see any print for several seconds after a transmission started and it may not finish printing until after the transmission stops. But the copy is usually 100% perfect even when the signal dips into the noise so you can barely see it in the waterfall. I swear I’m not biased but I thought Olivia performed much better than another mode that is no longer mentioned by name in G4ILO’s shack and is more than twice as wide.

My first contact was with Andri VE2AHS in Ottawa which was 100% perfect copy throughout. I don’t believe I would have made this contact using PSK31 at the same power level (25W into my attic dipole) nor do I believe I would have had such good copy using the other mode.

After lunch I was called by Fred OH/DK4ZC. Fred is very interested in digital modes and was apparently involved in trials of Chip – a mode similar to the latest one – with Nino, IZ8BLY back in 2004. He told me the trials were abandoned as the results were poor. He asked me what I thought of the new mode and of course I told him. Fortunately my K3 has very robust cooling and can withstand long periods of operation in continuous duty cycle modes. 🙂

Next I had a 40 minute chat with John, W9CY near Peoria in Illinois. Again, it is just unimaginable to have such a long ragchew with the USA using any other digital mode. John had heard interference from a strange new mode recently and asked me if I knew what it was so the K3 PA got another warm-up as I filled him in on the details. In fact, some fairly strong QRM from the unmentionable mode did appear during one of his overs but although I did lose a few words Olivia survived the interference pretty well, and better than the new mode survived Olivia.

Finally I was called by Adriano, IZ1PSS, who informed me I was his first contact on the Olivia mode. He had a good strong signal so I left him the frequency as I had been on the air for quite a while by that time.

I really enjoyed my session using Olivia – so much so that I intend to spend a lot more time in future using the mode. The ability to hold long rag-chew keyboard QSOs with near-perfect copy over long distances using relatively low power and an indoor antenna isn’t something that I thought I could do. We hams seem rather good at trying to reinvent the wheel when we already have several perfectly good ones that we hardly ever use.

See you on Olivia!