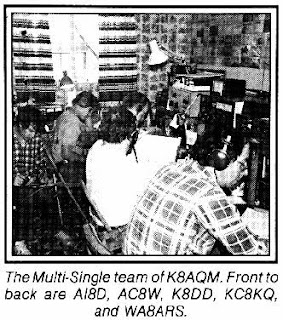 There are many ways to enter RadioSport and one of them is finding a group of operators who share the competitive spirit. One may not want to spend an entire weekend in the pilot’s chair or other commitments may compete for attention. A multi-single entry is an excellent opportunity to share resources, time, and establish new friendships.

Participating in this category made a significant difference in my attitude about RadioSport as a teenager. I spent hours inside the cans learning how-to listen for needed multipliers. A day existed, when paper dupe sheets tracked the log, and I learned precision and orderliness. A mistake in the dupe sheet would result in a significant point penalty.

Additionally, competing in this category set my personal future standard in terms of operating skill, station engineering, and sportsmanship. I modeled those who sat in the pilot’s chair and admired their operating skill especially when rate met or exceeded one’s capacity to write with a pencil.

Cox and Brockman stated, “In the battle of the Goliaths, W2PV captured the top world Multi-Multi score, no easy feat for a USA station.” (1982)

Furthermore, “The contest community around the world will remember this fall when the signals are strong and clear that a few of our friends are not present. W2PV, UI8LAG, and W3KT have become silent keys. Each one contributed to what the contest stands for: enjoyment and excellence.” (Cox & Brockman, 1982)

I want to remember their words as the technological wave rolls into the future of ham radio. Has competitive pursuit finally crossed the border where enjoyment and excellence does not exist or even count anymore? Is RadioSport beginning to miss the forest for the trees?

There exists somewhere in the future, conditions like 1981, when the cosmos fell into place and records fell like dominoes. Cox and Brockman stated, “The top USA All Band score was decided by less than a minute’s operating time on a good band.” (1982)

The North California Contest Club in the same year went from 9 million in 1980 to 160 million. One day the west coast will again stake its claim inside the club box.

Single Operator All Band in the USA was K1GQ.

If one wants to enter RadioSport think about creating a team of like-minded operators who enjoy the game while pursuing excellence.