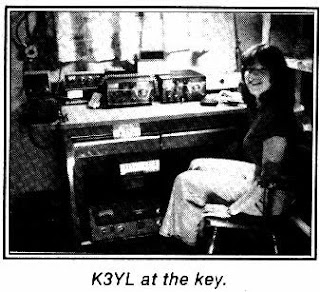 The rise of RadioSport talent begins in earnest and record makers are found throughout the pages of this article. Talent incubates somewhere albeit in the second chair while engaged in building the station that takes one or a team into the Box. They were younger men whose competitive spirit still burns brightly even today.

Operator Skill.
The captains of RadioSport like K3LR, K1AR, and N6RO are positioning themselves for long term success, essentially, as Cox and Brockman (1980) pointed out, “[I]ncreased operating skills were needed to cope with the onslaught…” (p 46)

Skill is an irreplaceable asset in any competitive sport. Technology continues augmenting and/or enhancing the enjoyment of our sport however it cannot diminish the importance of developing one’s RadioSport skill set. Physically sending Morse Code, listening before jumping into the swarm, understanding the vagaries of propagation, constructing antenna systems from one’s hands, are a few examples of skill building activities.

Controversy Rages On.
There is not much distance between 1979 and 2010 when reading about problems that plague competitive sports. RadioSport is not much different neither are we terminally unique when there are those who flagrantly violate the rules. Cox and Brockman cited infractions such as excessive power, unsportsmanlike operating techniques, and violations of the single operator category as problematic (1980).

I particularly like this quote, “When the statement you sign on the summary sheet becomes meaningless, it only serves to diminish the satisfaction of the achievement.” (Cox and Brockman, 1980, p 46).

Technology is now delivering the capacity to enforce rules from software defined receivers to audio recordings. I want the statement that reads I followed the rules to have credibility and meaningfulness at the end of the day.

Single Operator All Band in the United States was K1AR.

I’m still curious if any club west of the Mississippi garnered a top three position in the United States for at least two consecutive years? RadioSport history suggests otherwise and may explain the competitive importance of Sweepstakes for the West Coast.