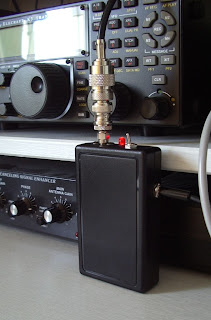 My 30m QRSS beacon transmitter is working very well. It has been on the air for more than a day now and has been received in Italy, Belgium, Holland and the UK. This is a 50 milliwatt signal being radiated by a magnetic loop antenna in the attic! Isn’t QRP amazing?

On Sunday I assembled the QRSS beacon into a nice case. This is not my favourite constructional task – give me toroids to wind any day! – but I do like the projects I build to look reasonable. The case I used was one I bought for the abortive 2m FM Fredbox project. I even used the SMA chassis socket I bought for that project as the case wasn’t really suitable for a BNC socket and I didn’t have any of the RCA phono chassis sockets I often use for QRP projects in my junk box.

This case has a compartment for a PP3 9V battery. I had toyed with the idea of using a PP3 battery and building in a regulator to reduce the voltage to the required 5V but space was tight and I was concerned that the heat given off by the regulator would affect frequency stability. Also with a current consumption of 70mA at 50mW output a rechargeable PP3 battery with a capacity of 280mAH would last for less than 4 hours between charges.

I observed that it is possible to squeeze 4 x AAA cells into the same space. Rechargeable NiMH AAA cells have a capacity of 1100mAH. Four of them will provide a voltage of 4.8 – 5.2V which will give 15 hours of operation and require no regulation at all. So that is what I will use. 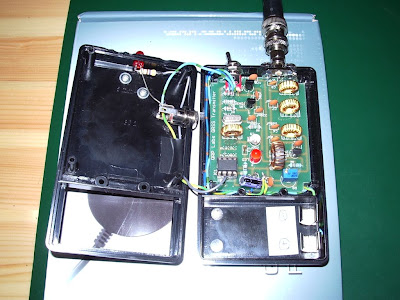 Fitting the project into the box took a bit of time because it was a tight fit in the case. I had to be very careful positioning the antenna socket, switch and external power / charger socket to ensure they didn’t foul any of the components. One of the frustrating things about boxing-up projects is that you can never find a case of exactly the size you want.

As I didn’t have a suitable battery pack I started off powering the transmitter from the computer. I took a redundant USB cable, cut the end off, determined the +5V and GND leads and soldered a DC power connector to them. That got the rig on the air, where it was almost immediately spotted by PA0TAB. The stability of the transmitter is excellent. There is a slight drift down in frequency by 10Hz or so during the first few minutes of operation. After that it appears to be pretty steady. There does not seem to be any need to encase the crystal oscillator in insulating material or use an oven as some QRSS builders have done.

Later on I dug out a charger for a mobile phone which has a USB socket on it and I switched the power over to that so I could keep the QRSS transmitter on overnight after I had shut down the computer. Nobody spotted me overnight, but I will leave it on for a few days to see whether I can be received further afield than Italy. To be received on the other side of the Atlantic would be a great thrill!

Here is a selection of grabs from stations that received my signal in the last 24 hours: 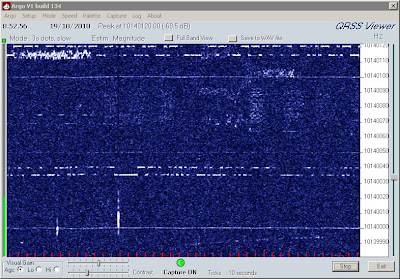 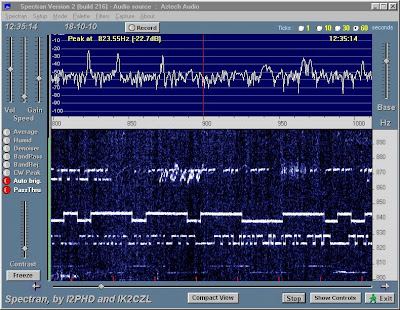 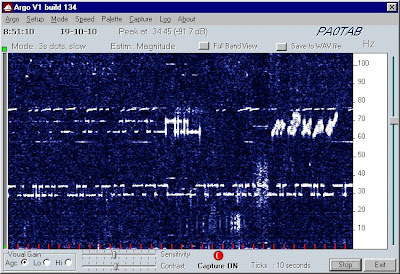 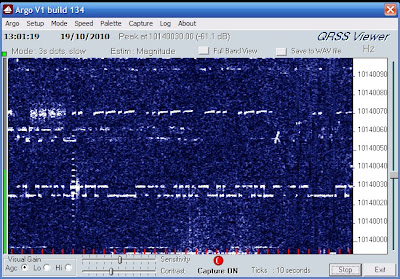