Today was a strange day.  It was my last day at my current job at Goldman Sachs. I’ve been there just over six years, managing all the Technology Department inventory (servers and networking and storage equipment) for the offices of the NY/NJ Campus.  I was the manager of the department responsible for receiving, inventorying, warehousing, and prepping for install a multi-billion dollar cache of equipment. I was also responsible for shipping re-purposed equipment both domestically and internationally. Believe me, you haven’t lived until you’ve been tasked with shipping millions of dollars of used equipment to places like Seoul, Sao Paolo, and Kuala Lumpur, and you were told it had to arrived undamaged (even though the original shipping containers had since long been discarded) and it had to arrive “yesterday”. I can proudly attest that in the six years that I was there, my department oversaw that inventory with a shrinkage percentage (loss due to theft, damage or mis-shipping) of less than 0.001%.

Last summer, Goldman felt that they had too many vendors, so they decided to downsize the number that they have on board. Our contract was farmed out to another vendor, and while my team was RIF’ed (reduction in force) I stayed on for six months to basically teach my replacements how to do the job.  My actual employer is Pitney Bowes Management Services, and through them, I will be starting at a new, non-management (actually glad for that, for a change) position with IBM next week.

My co-workers, the other outside vendors (IPC, Scholes, EMC, CBRE) who also serve Goldman Sachs are the best.  Totally unexpected, I walked into work this morning to find this waiting for me on my desk. 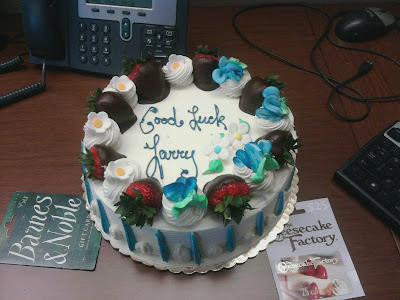 The head of the Security department phoned in for a bunch of pizzas and we had a bit of a going away party at lunch.  I am going to miss these guys like crazy.  Things could get pretty hairy from time to time and I slugged it out in the trenches with some of the best technical talent out there.  I am honored that they felt this way about little ol’ me.
Anyway, when I got home, I took the opportunity to get on the air and relax and unwind a bit.  I worked some DX and another FOC station, W9FOC – Gene in Illinois.  But by far the best QSO of the night was when NG9D answered my CQ near the 20 Meter QRP watering hole.  When I heard NG9D, my mind immediately said “Lynn ……..YouTube!”  Lynn has produced a bunch of YouTube videos that I have thoroughly enjoyed and it was so cool to be able to work him.  He was using his IC-703 at 10 Watts and he was a good 589 into New Jersey.  Conditions were good, so I received a 579 in reply
Lynn told me that he was trying to decide what radio he’s going to take with him when he goes camping this summer. I naturally suggested that he take his PFR3A and he agreed that it might be a good choice as it has the internal battery holders and internal antenna tuner.  Being such a small package is nice when you’re trying to keep down the amount of “stuff” that you take with you on vacation.  I asked him what antennas does he use when he goes camping and he told me about his Lambda antenna.  So happens that there’s a video that he’s done on it:
I thoroughly enjoyed my QSO with Lynn and I hope I get the opportunity to have another, soon.
72 de Larry W2LJ
QRP – When you care to say the very least!
Larry Makoski, W2LJ, is a regular contributor to AmateurRadio.com and writes from New Jersey, USA. Contact him at [email protected].