One of the things at the back of my mind when I was writing that the magic of ham radio wasn’t in high technology was the feeling that anyone who got into the hobby out of a mania for high-tech toys was soon likely to be disappointed. I’ve seen it happen when people who are new to the hobby and don’t yet know much about it get an enthusiasm for APRS or Echolink. They get disappointed that the network coverage is patchy or nonexistent compared to cellphone coverage because they don’t realize that it depends on hams to provide the infrastructure and where there are few hams – or none interested in these particular aspects of the hobby – there are no repeaters and no gateways. 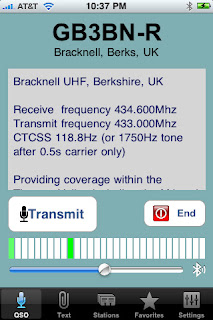 I’ve seen the same people criticize the latest VX-8, TH-D72 and Icom D-Star radios as being overpriced and unimpressive. They don’t like the geeky “walkie talkie” look or the plain 1990s LCD display. They can’t believe that APRS radios don’t support predictive text entry like the cheapest mobile has for more than a decade. And why can’t they have a colour screen and a scrolling map display?

It’s easy to dismiss these criticisms as coming from people who don’t understand that ham radio is a specialized niche market and that amateur HTs don’t benefit from the economies of scale which allow vastly more R&D to be spent on a smartphone costing a similar amount of money. But then I realized that perhaps the critics had a valid case. Manufacturers of smartphones don’t completely reinvent the wheel whenever they release a new model. They just design the hardware. But the hardware is a platform. On it runs a standard OS and various apps, a few of which may be customized to the manufacturer or phone but most of which are generic. Given that software development is one of the most time consuming and expensive parts of any new technology product development, wouldn’t that be a huge saving?

Why can’t top of the range hand-held radios use a similar hardware architecture to cellphones? Instead of a custom design the radio would be a computer running embedded Linux. The RF side could be SDR or it could use conventional technology – it wouldn’t matter, that would simply depend on what is most cost effective and delivers the best battery endurance. But all the control functions, together with transmit and receive audio, would be accessible through an API to software. The user interface would be an app.

Since the radio is a computer the interface would be endlessly customizable and all kinds of things not possible with existing radios could be feasible. Instead of entering local repeater frequencies into memories you could install an app that gets your position from the built-in GPS and shows you the nearest repeaters. One click and you’re listening on it.

Instead of a plain LCD display showing distance and bearing your APRS capable radio could show a full map display just like APRSISCE currently provides on Windows smartphones. You wouldn’t need packet modem hardware in the radio because packet generation and decoding could be done in software. In fact there would be no such thing as an APRS capable radio. The platform would be the same – if you wanted APRS you would just install the APRS application. If you wanted Echolink you could add the Echolink application. If you wanted D-Star you could buy the D-Star app from Icom. If you wanted to work satellites then I’m sure someone would write an app that would keep track of where the satellites are and even control the radio frequencies taking account of doppler.

You could power this hypothetical next generation radio using cellphone battery packs, which are a lot cheaper than the custom battery packs for traditional ham radios. You could even use standard cellphone accessories.

So why won’t this happen? I guess the reason for that is that Yaesu, Icom, Kenwood and the rest don’t make cellphones. Their business is making radios that are intended to be as dumb as most of their users. Ham radio is just an offshoot. The market just isn’t big enough to justify developing what for them would be a completely different and unique hardware platform. So I guess for the foreseeable future we’ll be stuck with our geeky walkie talkies and the cool stuff will all be on cellphones.