When I was a kid, I vaguely remember a comedian on TV, who would say in a thick, mock German accent, “Peoples is crazy!” or something very similar to that.  That line kept running through my mind tonight as I volunteered as a CERT member for South Plainfield Emergency Management at the South Plainfield High School graduation ceremony, held at the football field. 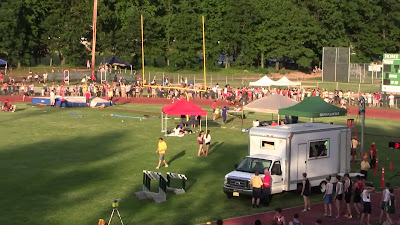 We provided a whole bunch of services. We directed people to parking spots, and as it was a hot day – we handed out cold bottled water to anyone who desired it, we provided “a presence” and kept our eyes peeled for anyone who looked like they might get ill or faint, or might otherwise need assistance.

By the end of the ceremony, 260 high school grads received their diplomas after many speeches, much cheering and screaming and hoopla.

The best came at the end of the night, though, as dusk was falling and the near full moon started to rise.  On three separate occasions, I kept spectators from jumping over the chain link fence and running onto the football field to greet their graduates.  In each case, I’m not talking about kids here. I am referring to older “Dad types” who should have known better than to attempt such a stunt.  On each occasion, as the improbable was about to be tried, I simply but firmly stated, “Please go around to the gate and don’t jump over the fence.”  The first two guys said nothing – and just complied.

The third guy?  Oh, he was a good one. A rather snarky “And why should I listen to you?” was what I got for my request.  Rather than argue, I just very politely asked, “Sir, do you really want your son or daughter to remember their high school graduation night as the time that Dad had to go to the Emergency Room to get stitches in his leg after he cut it while trying to jump the football field fence?” He looked at me, thought about it for half a second and went around to the gate.

Follow up – Saw my fence jumper today at the A&P – yep, the third guy.  While I was shopping, he tapped me on the shoulder, shook my hand, and thanked me for preventing him from doing something “potentially very stupid”, as he put it.  Sometimes it’s all worth it.

3 Responses to “Peoples is crazy!”