16 August 2014 | by Steve VE7SL  |  Share |  Tweet |  Leave a Comment (3)
Having studied many of the receiving systems being used by others, it seemed that designs ran from the 'very simple' to the 'very sophisticated'. Once again I looked to Roger's experimental work involving receivers since the one he had been using had evolved over a period of several months and several tweaks. The design that he used was an adaptation of the original low-noise PIN diode laser receiver designed several years ago by K3PGP and shown here on K3PGP's Experimenter's Corner.
Roger's adaptation, shown below, appeared to be getting excellent results when used in his over-the-horizon clear air scattering tests.

Although Markus, John and myself all built the same design, it is interesting to see the end results, as each used a different construction method.

John chose to use perfboard and point to point-to-point wiring: 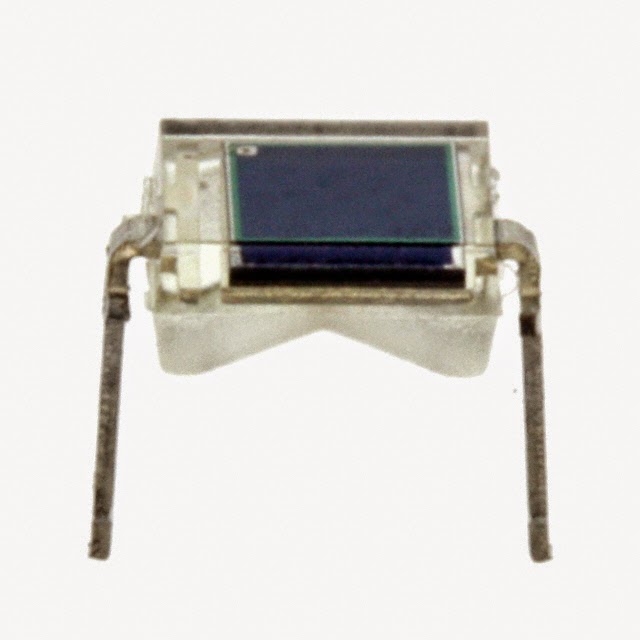 All of us used the Osram BPW34 PIN diode for the detector after having it recommended by Clint in e-mail 'detector discussions' as being a good performer . It is still readily available from the usual places, at around eighty-cents.

The BPW34 turns out to be sensitive over a fairly wide range of frequencies. At our frequency of interest (deep red) at the edge of the IR range, the detector is operating at about 65% of its peak performance which is lower and well into the IR range.


Many silicon PIN photodiode detectors are available with filters that let them achieve maximum sensitivity at the lower IR range while blocking the unwanted higher frequency visible light sources. Such is the case with this one, available as the BPW34FA. If you wanted to run an all IR system, reducing visible light QRM, this detector might be a better bet.


When it comes to diode detectors, there are always  new challengers appearing in the marketplace. There are still many opportunities for experimenting when it comes to optimizing the front-end of your receiver.

When coupled with its focusing lens in the final stage of construction, the receivers are amazingly sensitive. Even the slightest hint of a light source, often invisible by eye, would produce a response from the system....even starlight!

One of the first sounds detected was a low-pitched and repetitive 'thump-thump' which turned out to be the wingtip strobe lighting of jet aircraft activity approaching and departing Vancouver International Airport. After several nights of listening it was apparent that the strobe lighting could be detected from at least 70 miles out and from aircraft still above 10,000'. Panning over to the runway (about 25 miles away), I could often detect the strobes from departing aircraft even though they had not appeared above my sea-level horizon. Eventually I would see them rise above the horizon, about a minute after hearing them on the runway while on their takeoff roll. I suspect the propagation mode would be a form of clear-air scatter since there was no direct line-of-sight to the signal source when initially heard.

Panning the receiver slowly along the many miles of coastal mainland, on the other side of Georgia Strait, revealed many signals, most of them with different audio signatures. Some sounded rough and buzzy, like an unfiltered CW note, while others were T9 and very clean. Most had different repetition rates resembling radar sweep speeds but, once again, most sources were not visible to my eye...nor were they located when scanning the signal source with binoculars. I suspect that most signals were from various fixed lighting installations either strobe lighting or area flood lighting. Some targets appeared to be slowly moving and were found to be coming from tankers and container ships travelling along the far coast line. Hearing so many of these modulated lightwave signals was certainly an interesting experience and something I had not really expected. Even individual stars would produce a detectable 'hum' as the receiver/lens combination was aimed directly at them.

My one and only daylight test revealed extremely high levels of hum from the bright sky and, no doubt, front end overload desensitising....but the sudden sound of a buzzing bee in the headphones turned out to be just that, as the reflected light from its wings was being modulated by the rapid flap-rate....all very eye-opening to me and totally unexpected.

Here are some recent audio recordings made during a period of heavy cloud cover over Georgia Strait. All are on the far mainland coast or further inland and most sources were not visible to my eye.


I think such a system would make a wonderful 'science-fair' project for a budding student, complete with recordings....but perhaps it has all been done before!

With all three receivers working well, the transmitters would be next....
Steve McDonald, VE7SL, is a regular contributor to AmateurRadio.com and writes from British Columbia, Canada. Contact him at [email protected].

3 Responses to “On Making Nanowaves – Part 3”