Oh, so that’s where you were

Some of you may have noticed that I haven’t published anything here for a bit over a month. I was also pretty much absent from several of the other “social web” places that I frequent (Facebook, Twitter, etc.) and in fact got a couple of private notes asking if everything was OK. (Thanks to those who asked for your concern.) The short version is that everything is just fine. Here’s the longer version:

Around a week after I published my last update, I managed to come down with a kidney stone just about a year after the last time I had one. I’ll skip the details, but suffice it to say that I wasn’t very comfortable for a while and blogging, ham radio, and pretty much everything else not essential to feeling better got put aside. Complicating things was the fact that along with Sharon, Justin, and Brett, I was supposed to leave for vacation on the evening of December 25th, and the doctor was pretty adamant that I shouldn’t be traveling unless I had passed the stone. Fortunately, it did pass just a couple of days before that, and given everything we had to do before leaving I never had time to do an update.

The trip itself was something we’d planned for a long, long time, figuring that with the kids getting older (they are both in college), it would become increasingly difficult for all of us to get away. Our trip started in Barcelona where we spend three days sightseeing followed by a twelve-day Mediterranean cruise with stops in Palermo, Athens, Rhodes, Alexandria/Cairo, and Malta. I’m not going to go into detail here about the trip, but I did want to post a couple of pictures that are on topic for this blog. 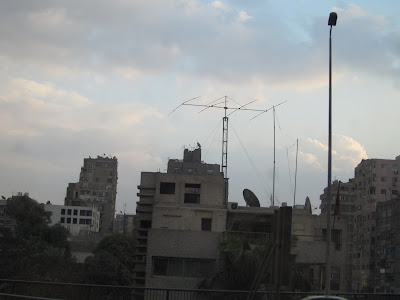 First, as we were driving from Cairo to the pyramids in Giza, I looked out the window of the bus and saw this antenna. Actually, although I didn’t notice it at the time, in addition to the beam that’s right in the middle of the picture, there’s also what appears to be a wire dipole just to the right of that. Unfortunately, I don’t know specifically where this picture was taken other than we were in Cairo at the time, so I don’t know who that might belong to. (Any Egyptian hams reading this?) 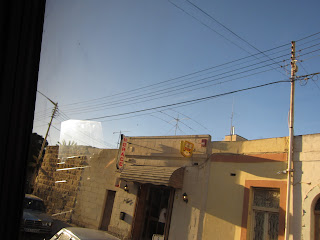 I know exactly who the next antenna belongs to: The Malta Amateur Radio League.  I know this because just a second or two before I took this picture, we passed a big sign that said “Malta Amateur Radio League”. Unfortunately, we were on a bus driving from the city of Mdina to the capital city of Valleta, so I couldn’t stop to get a picture of the sign, but I did get a picture of the antenna on the roof of their building. I apologize for the lousy picture but I’m glad that I was able to even get this shot before we had completely driven past. We only had six hours in Malta, so I didn’t have a chance to try to get back to the MARL shack to see if there was anyone around, but I can say that Malta was absolutely beautiful and I hope to get back there some day for a longer visit.

I guess I should mention that I didn’t do any ham radio while we were away at all. We had a very tight schedule almost everywhere other than some very relaxing days at sea, and given the difficulties of transporting gear with me (in addition to everything else we brought), licensing, and the fact that unfortunately Royal Caribbean Cruise Lines explicitly prohibits the use of ham radio on board the ship, I decided that it didn’t make much sense to try to operate. As a result, it was just over a month between the last HF contact I made in December (before I was ill), and the next one that I made in January after I returned.