Not so smart phone 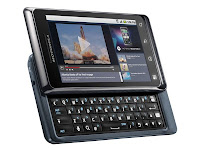 My Motorola Milestone 2 (which I think is known in some places as a Motorola Droid) has started acting up. I’ve had it more than a year now so it is out of warranty.

A couple of days ago I picked it up one evening and it was stone cold dead. Pulling the battery made no difference so I dropped it into the multimedia base and when it came to life it showed the battery was at 0%. The phone sleeps in the multimedia base so it is always fully charged and there is normally 60% left by the evening unless I’ve been running some GPS applications, which for just this reason I don’t. How odd.

The next day after a full charge the phone appeared to be OK. A couple of hours later I scrolled to the page where the Gmail app lives and its icon had changed to a box with a gear wheel in front of it. When I tried to run it I got a message “Application not installed.” Even odder.

I tried the tech support guy’s standard fix which is to switch it off and then switch it on again. To my relief this did the trick. The Gmail icon was back again and the app seemed to be working normally. Until this morning.

When I got up I was surprised that the phone wasn’t winking its green light at me to show there was email waiting. Had no-one at all commented to my blog? After breakfast I turned on the shack PC and lo and behold there were 4 messages in my inbox. The phone still showed nothing. Eventually I checked the account settings and every one of my Google accounts had the “Synchronize Gmail” setting turned off. How very peculiar.

I turned sync on again and the phone is checking my mail as normal. But I just wonder what it’s going to do next?

5 Responses to “Not so smart phone”