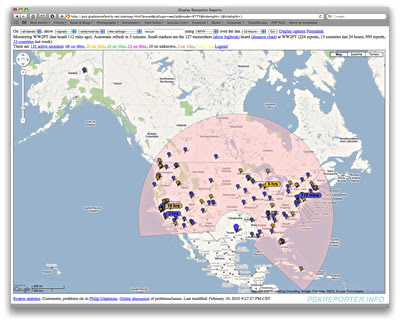 QRV 8 hours (though with several breaks), mostly search & pounce but had a few runs. Had to QRT at 0400, my brain was starting to fade. In hindsight I wish I stuck it out for another dozen QSOs or so; had I done so I would have beaten my score from the NAQP SSB test in January. But I came close…
Started on 20m at 1800, then switched to 15m at 1915 and worked just about all stations I could hear — nice to see 15m coming back to life! After an 1.5 hour break for lunch I spent another hour on 20m before switching to 40m at 2300 and staying there for the remainder, taking a few short breaks along the way.
Really wanted to try 80m again after the good time I had during MAQP SSB. But the Tarheel just doesn’t tune up very well down there, and I’m reluctant to try pushing 100W at 100% duty cycle into a poorly matched antenna.
Worked K1SFA, KL7AC, VX6AO, WØYK, and W6YX for the hat trick on all three bands; 28 other stations were worked on two bands. In the end, 6 new states on RTTY (AK, IA, LA, MI, MS and VT); 1 new state on 40m (AK); and 7 new states on 15m (AK, CA, ID, NV, NY, UT and VT). Had a Cuban station call me during one of my runs on 15m, it was the only DX worked in the contest.
Summary:
Band-by Band Breakdown: