The renovation of the G4ILO shack is about half completed. The wood for the new shelf module needs another coat of paint, then it can be built and everything put back in again. Unfortunately old age is catching up with me and I am just sooooo tired and have so many aches and pains from all the work so far that progress is (literally) painfully slow. I missed the talk on SOTA at the radio club on Monday evening because I would probably have just fallen asleep! 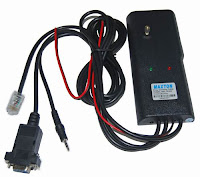 After the flying hiatus some items I ordered from China and Hong Kong are starting to filter through including the programming interface for the Motorola GP300 radio. It is a Maxton RPC-M300, pictured on the right, and it came with a CD containing the necessary programming software. (The software can also be found on the hampedia website, so please don’t ask me for a copy.)

The software runs under real MS-DOS, not a DOS window. My researches had already established that it doesn’t run properly on newer, faster computers, so I installed it on the oldest PC I had available, a 2002 vintage Toshiba Satellite 1800, which happens to have both a floppy drive and a serial port. It doesn’t have network access, so getting anything on and off it is a bit of a headache, but I still have a copy of a Windows 98SE install CD and the required boot disk, so I was able to use that to provide the MS-DOS access.

No instructions came with the interface. It’s obvious that it clips on the back of the radio, and the red and black wires are used to provide power, but there is no indication of what voltage to use. Some DIY interfaces that have been published use a 9V battery so I set the variable power supply to 9V. The other two plugs – one like a telephone plug and the other a 3.5mm stereo jack – are presumably for other radios that the interface can be used with, so I left them dangling free.

I applied power and the red light on the interface came on. I then tested communication between the software and the radio, and the green light flashed for a few seconds, then I got an error #2 “No acknowledgement.” I tried again, this time after switching the radio on with the volume control, but then I got an error #7 “Invalid opcode.”

I had read that the programming software may not run properly on any Pentium computer at all, due to its use of timing loops. One of the suggestions to slow a faster computer down is to disable the CPU cache, so I went into the Bios and did this. This didn’t make any difference to my inability to program the radio, but it did make Windows 98 take 20 minutes to load and be unusable once it has done so. Unfortunately I discovered this morning that I had somehow managed to set a password on the Bios which of course I don’t know, so now I can’t get back in to the Bios to re-enable the cache. 🙁

It seems as if I will have to give up on the idea of programming this radio myself. My only hope now is that someone at my radio club is able to help with this. Unless anyone has any other suggestions?

One Response to “Motorola programming frustration”