Minimalist Radio: A Lesson in Efficiency

13 June 2013 | by Mike AD5A  |  Share |  Tweet |  Leave a Comment (1)
One of the early posts on this blog was an article on "What Kind of QRP'er Are You", one of the categories identified in the article was the minimalist, i.e., the smaller, the lighter, the better. At some point being a real "Minimalist" becomes an art form that requires not only ingenuity, but also imagination. You can't always buy true minimalist equipment. Sure you can buy smaller rather than bigger gear, but at some point, without imagaination, you reach a wall that only  creativity can breach.

Recently I took a trip to Santa Fe, NM. I had never been to Santa Fe and had heard what a great place it was so my wife and I wanted to experience the city for ourselves. Also there are some nice SOTA summits in the area that I wanted to tackle  having become a SOTA addict. In my brief planning for the trip I contacted Fred, KT5X, who lives there to ask his advice on what summits might be doable for a relatively fit flatlander. Fred offered not only his advice but also his willingness to serve as a guide on the first summit. Eventually he recruited John, K1JD, a recently transplanted Santa Fe resident to come along. It was this trip that I learned what minimalism is all about.

I had a normal size day pack filled to brim with redundant equipment, two radios (ATS-4B, MTR), two antennas (vertical, EFHW), you get the picture, redundant but not a huge load. I will defend some of the redundancy in that I have limited time and don't want to miss an opportunity to activate a summit because of some equipment failure. Fred shows up with basically a camal back water pack that has a front pocket on it. A small carbon fiber pole that collapses down to 21" and extends to 21 feet, a resonant antenna and a home brew enclosure for his MTR that contains a key, power supply, logging pen and serves as an operating desk to log QSO's with. Fred's total set up is around 1.5 lbs. The MTR Board is designed fit in an Altoids tin to give a perspective on the size of the enclosure. 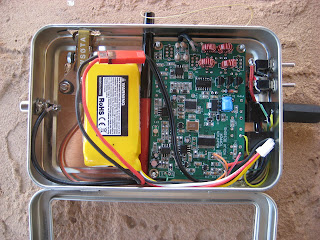 The KT5X verson of the MTR 20/30m radio
The key, a micro key,  is in the upper left hand corner and is retractable for transport and extended during operation. It is labeled WS0TA, a SOTA club call. The battery is a LiPo 500 mAH battery that will handle multiple activations due to the low power drain of the MTR.﻿ The logging pen is a Space Pen and has a string attached to keep it within reach and it sits in a straw holder, the red tube in the middle of the enclosure, when not in use.
To log, simply close the enclosure and log on a 3" x 5" card using the Space Pen. Brilliant.
Needless to say, when seeing what Fred was carrying to the top of the mountain I felt a little over dressed. However it was a great lesson in what minimalism is all about. In the mountains the fewer pounds you can carry, the more enjoyable the day. I have begun the downsizing of my equipment list and have been motivating to try a little creativity rather than just use it out of the box.
Mike Crownover, AD5A, is a regular contributor to AmateurRadio.com and writes from Texas, USA. Contact him at [email protected].

One Response to “Minimalist Radio: A Lesson in Efficiency”