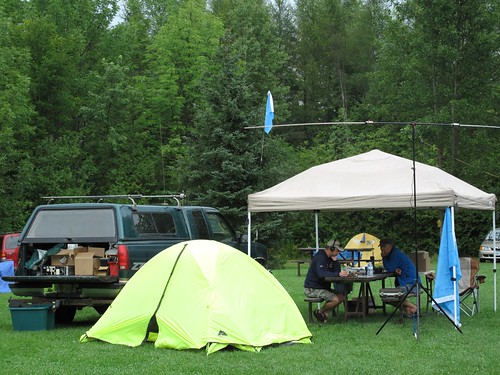 I attended the first Maplecon last weekend, which was a gathering of Canadian QRPers. The venue was Emily Provincial Park campground. Gerry, VA3GLT, and myself headed down on Saturday morning, despite the convention’s start on the Friday, as both of us had commitments in the afternoon and evening of Friday 20th Aug. We had an early start and drove down the 401 highway to Port Hope then turned off and travelled North to the park. By noon we arrived and had put up the tent and an antenna. 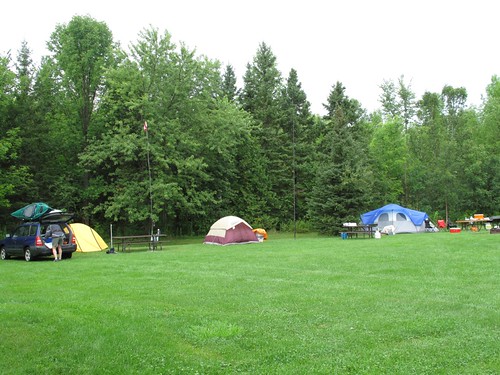 The campsite. Notice that vertical antennas on poles were popular

The antenna for this event was a freshly homebrewed doublet made from some TV twin-feed I bought a few years ago and now decided to use.  It was split 16′ 7″ down to form two arms of the doublet, and the remaining 23′ or so of twin feed was the feedline.  At the end of the twin feed we installed a homebrew 4:1 current balun, which I had built a few years ago.  The antenna was raised between two trees high enough that the feedline dropped vertically down and just reached into the tent.  A short run of coax was used from the balun to my Elecraft K2.  It tuned on 40m, 20m, 17m, 15m and surprisingly 80m (given the length of the antenna is would be a pretty inefficient).  I could not get a tune on 10m. Possibly if I took out the 4:1 balun I may have made it.

There was a just short of thirty attendees at the convention and we chatted with quite a few.  There were three tables set out as stalls, one with QRP rigs, one with QRP-ARCI information and one with Youkits radios.  I would have like to have spent more time looking at the QRP equipment table, but things felt a little rushed as we had arrived late.  We had a lovely barbecue lunch prepared by Jeff, VE3JFF, and his family after which I had a chat with Yimin and Fred, VE3FAL from Youkits about their new line of QRP radios. That will be covered in a future post as I made a recording of that conversation. 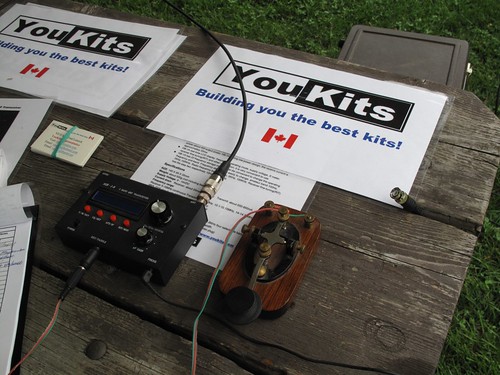 There was an antenna competition on so I spent a little time in the tent in the afternoon trying to make contacts on PSK31.  Beside the antenna and the K2 I was using a little Asus notebook, a homebrew interface for digimodes and a large battery pack.  It is so large that Martin, VA3SIE accused me of being a secret QRO operator!  (That hurt Martin).

I had little success with contacting stations on 20m PSK until finally just before dinner when we made a contact with a weak station that was calling CQ.  I replied and was acknowledged by Mirek, SP9ONC in Kozy, Poland.  He was running QRP from a TS-2000 and and we exchanged details. I was really pleased that my first contact was DX and a QRP-QRP contact too. Soon after came my second contact Fred, KD8AQ in Mt Pleasant, TX and we had a nice chat.  As the call for the chilli dinner had gone up earlier I had to break off that conversation.

Dinner was provided by the Ottawa Valley QRP Club and that was the second good meal.  The chilli was tasty and Martin, VA3SIE,  had brought some British delicacies for dessert, including Battenberg cake, which I had not eaten in many years as  it does not often appear on shelves in Canadian stores.

After dinner there was the antenna competition, door prizes and a raffle for a ‘shack in a box’.  For the antenna competition Michael, VE3WMB, won the prize for the best technical design with a folded over vertical antenna, and I won for the best performing antenna with the DX contact with SP9ONC.  I was extremely pleased to find my prize was a Norcal BLT tuner which will very likely become the tuner for that doublet in future.

There were plenty of door prizes including several transceivers.  Gerry, VA3GLT, was lucky to get the first of two HB1A transceivers that had been generously donated by Youkits.  There were so many door prizes that I think all attendees went away with something.  I won a set of pliers and a year’s subscription to QRP Quarterly, the QRP ARCI’s excellent magazine.  So when my current subscription is up I can use that. 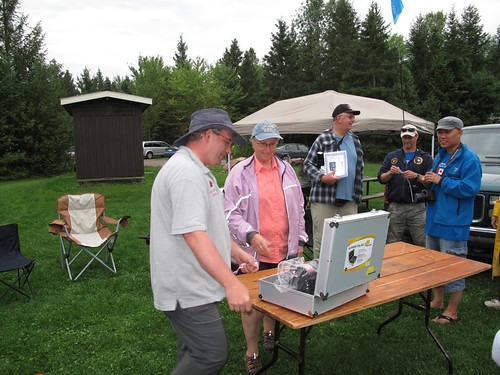 The 'shack in the box' prize is presented. The prize was a transceiver, battery pack and case.

After all the prizes had been given out there was chatting into the evening and then Gerry, Martin and myself went back to the tent and made two more contacts on 20m. These were Tom, KJ4QDZ , in Lillian, AL and Virgil, WA5TLP, in Willston, ND. Not too many contacts but enough to make me happy with the performance of the antenna. 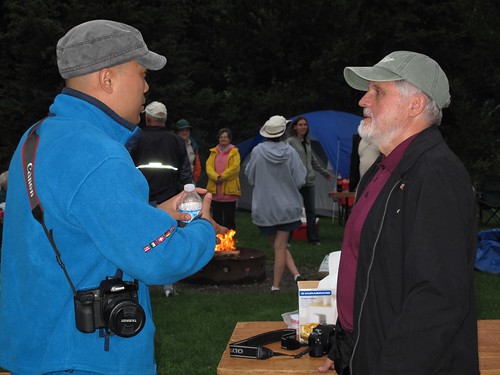 Yimin of Youkits chatting with Gerry, VA3GLT after the prizes were awarded

Over Saturday night and Sunday morning there was a lot of rain.  So after breakfast next morning there were a lot of people leaving.  Gerry and I thought it was prudent to take the tent down during a brief lull in the rain so there was no making contacts, just collapsing and packing a wet tent.  We thanked Jeff, VE3JFF, for all his hard work that had resulted in a successful first Maplecon 2010, said goodbye to those that remained and we headed home before noon on Sunday.

Will there be another Maplecon next year?  Well after the prize giving it was discussed by all and it was unanimous to have another.  So here is looking forward to Maplecon 2011.