Mac and cheese me off!

9 May 2021 | by Mike VE9KK  |  Share |  Tweet |  Leave a Comment (0)
As the contest season approaches, I wanted to once again warm up my CW contesting abilities.  One of my go-to programs is Morse Runner   and now it's available for Mac as well as Windows. About 6 months ago my faithful Mac PC informed me there was an OS upgrade I could do call Big Sur. Soon after the upgrade I found out that some programs no longer worked under this OS. One program that failed to work was Morse Runner. I did some online reading about the steps to downgrade to a previous Mac OS X and at the time I just did not want to end up spending hours at the PC trying to get things working again as these adventures I have found never end up being fast and easy.

Well this weekend I found myself looking at the non functioning Morse Runner desktop icon on my Mac and I decided to take the plunge and downgrade! I decided to try what seemed to me to be the easy way which was to restart the Mac while holding down Option + Command + R keys and wait for a "spinning world globe" on the screen. Well the globe showed up and it was spinning with the words "internet recovery" I sat back and thought I was on my way. After a long time of globe spinning I was given the message "internet recovery failed" I tried again and was given the same message and I thought "here we go....."

It was time to take the full plunge into the dark waters of erasing the hard drive......what could go wrong??? So off, I went to restart the Mac and held down the Command + R keys and I was greeted with the Mac OS utilities screen. I mouse clicked all the way through the hard disk erase process and then restarted the PC. I was greeted with a black screen (a black screen is never a good thing) with a do not enter symbol under that was a link for Apple support.  I restarted again just hoping that would do the trick but the same screen greeted me. I was told this screen (via the internet) is informing me I either have a damaged hard drive or my Mac is unable to boot up. 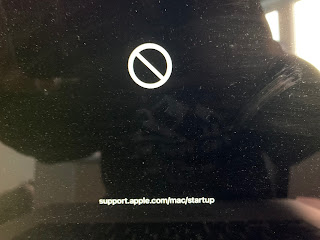 It was time to go on my Windows PC and search the internet for answers. I did locate many posts of people who encountered the same result as me.  Apparently I did not complete some important steps when I erased the drive. It was time to restart the PC and hold down Command + R keys again to get back to the Mac OS utilities.  I then had to choose the disk utilities tab I then had to choose file formate (APFS) and choose partition map (GUID) and then finally under partition I chose 1. I then clicked continue and everything was ok.

It was time to move onto the next step and install the OS, to this it was time to restart AGAIN while holding Command + R keys and then when the Mac OS utilities popped up choose "Reinstall Mac OS" and see what happens. This time I was greeted with the Mavericks OS and it was in the process of installing. Finally all done.........well not really! 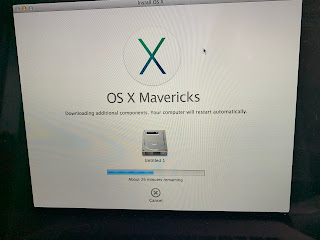 Once I entered all my information when prompted the OS finally started and I began to load my programs. The first was the antivirus and I was told the Mac OS version was out of date and the antivirus would not be installed. Great, another road block......The scuttlebutt on the internet informed me to go to the Apple Apps store and look for the OS I wanted to install then click on it and it will install. Well the only OS I could find was Big Sur and for sure I did not want to go down that road again!

I found a link to the OS Catalina and I tried that but it eventually failed to download. I then found the Mojave OS  and it too failed to load. After some internet searching I finally found a link to the Mojave OS that according to user feedback was working as of just a few days ago. I tried it and it worked so I have Mojave 10.14.6 on my PC.  I am happy to report that all my programs are happy now and my copy of Morse Runner for Mac OS now works just fine.