Chinese-made VHF and UHF hand-held radios are no longer the novelty they were a few years ago when I discovered the Jingtong JT-208 and got one to try. They are no longer the shoddily made bits of junk the Jingtong was, either. Some Chinese makes like Wouxun are now directly imported into the UK and USA so unadventurous buyers don’t have to take chances on eBay. But there are better bargains and more choices to be had if you use the auction site. When I saw a smartly styled compact VHF handheld radio transceiver 136-174MHz being sold for only £40 it looked like just the job for keeping downstairs to monitor my Echolink node and acting as a backup radio for WOTA activations so I decided to order one. Shipping from Hong Kong took one week. 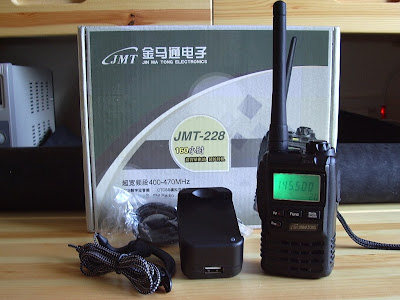 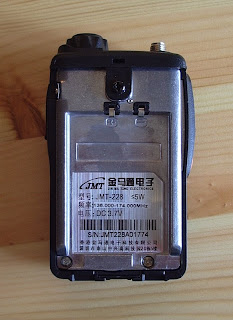 The radio is a model JMT-228 and is made made by Jin Ma Tong Electronics, which is not a company Google has much information about. Whilst tearing off the wrapping I experienced a heart-sinking feeling as the box was revealed together with the description “400-470MHz.” I was afraid the seller had sent the wrong model! Inspection of the manual revealed the radio comes in VHF and UHF versions, and when I looked at the back of the radio the label showed “136.000-174.000MHz.” What a relief!

Together with the radio and manual, the box contains a short helical antenna, a metal belt clip, a carrying strap, a 1500mAhH 3.7V Li-Ion battery pack similar to those used in mobile phones and digital cameras, a 100 – 240V AC charger with fold-out US-style mains plug, a USB cable (presumably used only for charging as there is no mention in the manual of programming software) and a hands-free style speaker microphone terminated in a 2.5mm stereo jack.

Here is an “unboxing” video (not made by me) from YouTube:

The JMT-228 is very light (the manual amusingly gives the weight as 200kg including the battery!) and looks rather similar to the early Yaesu VX models. It’s a bit smaller than the compact VX-8GR as you can see from the photograph below. The build quality seems very good. The radio is built on a die cast chassis as you can see when you put in the battery. It doesn’t have quite the same solid feel as a Yaesu but the light weight is a bonus. The belt clip is metal but a bit flimsy and it is fixed to the radio using one screw. There is no retaining lug (although the clip has a hole for one) so unless you tighten the screw so hard you risk stripping the threads it could rotate allowing the radio to fall off the belt.

The glass in front of the display is actually plastic which scratches rather easily – there are a couple of dings in it already that I don’t remember doing. A small thing perhaps and forgiveable at the price but something many hams won’t think about as we take the high quality of ham radio products for granted. 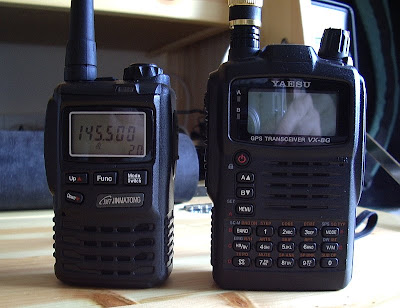 No claims are made that the radio is waterproof. Indeed, the manual warns: “Never expose the transceiver to rain, wet areas or any liquids, or it may be damaged. However, the speaker/mic and USB/charger sockets have stout rubber covers and another page in the manual states: “The transceiver is not fully water-resistant while using the speaker/microphone” which implies that it could be. The JMT-228 certainly doesn’t look any less waterproof than the Yaesu VX-8GR so it could probably withstand the odd rain shower, but don’t quote me on that as I haven’t tried getting it wet just to see what happens.

The manual is in Chinese and English. The English part is well written for a Chinese radio, though the most important part, describing the “Auxiliary Fuctions” (sic) is squashed into two pages and less well written so you need to do some guesswork to determine some of the functions. RC sets the CTS or DCS tones for receive, TC sets them for transmit. TOT sets a time-out timer. OFFS sets the direction of offset for repeater use, a different menu OST sets the amount of the offset.

There are 99 memories and they store the offset and tone settings in force at the time of programming. It took only a few minutes to enter in the 2m simplex channels, the three local repeaters and my Echolink node settings. Memory mode is clearly the way to use this radio on the amateur bands as it does not have automatic repeater shift as found on dedicated ham radios.

There is a scan mode, which simply scans all the memories. There is also an FM Radio mode that lets you listen to Band 2 FM radio frequencies. The sound quality isn’t the greatest for listening to Classic FM or BBC Radio 3, but it’s usable.

The antenna socket is an SMA type. Surprisingly for a Chinese made radio it is an SMA female, the same as that used on radios from Yaesu, Icom and Kenwood, so you can use the same SMA-M accessory antennas you could use on those radios. I can even use my SMA to BNC adapters! The supplied antenna is 4 inches long, presumably a helical whip, and fairly broadband with the best match, a 1.6:1 SWR, at 156 MHz. This isn’t going to be optimum (tests I have carried out in the past have showed that a noticeable benefit is gained by tuning short helical antennas to match the frequency of use) but it is no worse than the antennas supplied with Kenwood handhelds and only to be expected in a radio designed to operate over such a wide band.

The receiver sensitivity seems on a par with other handheld radios I own. Output power is claimed to be less than or equal to 5W. Frankly, I would not expect to get 5W out of a radio powered by a 3.7V battery pack. If you did, it would get very hot very quickly and the battery would soon run out. I measured the output power at 3W which I think is very good for a radio of this size. I had no trouble opening the GB3LA repeater more than 50 miles away using a 7 inch long helical (but not with the supplied antenna.)

There is no low power setting, which is a bit of a disappointment and will not help battery conservation. On receive, however, the radio seems to run forever, helped no doubt by a quite severe power saver mode. This does not appear to be user configurable nor can it be disabled so you could not use this radio to receive packet or APRS.

The modulation using the internal microphone is OK, but a bit on the low side. Using the included speaker/mic it is a bit better. Note that although this speaker/mic is similar to a hands-free mobile phone kit, the JMT-228 transceiver does not have VOX, so it is necessary to key the transmitter by pressing the button on the back of the mic. Here are some audio recordings of the JMT-228, with a couple of other hand-held radios for comparison purposes.

As you can hear, the audio level is similar to the Motorola GP300, another radio designed for use on the professional high bands. Amateur band radios tend to have a higher modulation similar to the TH-205E.

When using the speaker/mic I found that the transceiver tended to lock in transmit – presumably due to RF getting into the speaker/mic cable which is right next to the antenna. This is a bit of an annoyance, which could possibly be cured using a really small snap-on ferrite if I had one.

Despite a few niggles I think the Jin Ma Tong JMT-228 transceiver is a nice little radio and would be a good buy for anyone wanting an inexpensive and compact transceiver for use in the amateur 2m band. I think the Chinese are going to own the market for basic single or dual band handhelds very shortly and people will only buy from the specialist manufacturers if they need specialist functionality such as APRS, wide band scanning, a short wave receiver or even, dare I say it, D-Star.

One Response to “Look out, Yaesu”