The Digital Voice Access Point (DVAP) Dongle is a small device now available in the US that plugs into a computer and lets you create your own low power (10mW) RF gateway to the D-Star network. 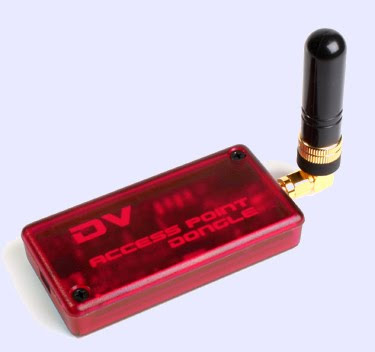 Leaving aside my dislike of D-Star (it is incompatible with existing radios and requires you to purchase an Icom radio to participate, which in my book makes it effectively a proprietary system) for a moment, as someone living in an area where you hardly ever hear any 2m FM activity I can see the attraction of something like this. It would allow one to make some internet-linked ham radio contacts from around the house using a hand-held.

A couple of years ago I started looking into the idea of setting up a low-powered personal EchoLink node, for similar reasons. I prefer EchoLink to D-Star for the simple reason that almost any existing FM radio can use it (as long as it has a DTMF keypad). EchoLink has been going for years and already has a critical mass of users, which is surely more important from the point of view of finding people to talk to than using some new and more state of the art system?

Unfortunately it appeared that in order to set up an EchoLink node I would need to apply for special permission, providing details of three people who could turn the equipment off on instructions from Ofcom, wait months for permission to be granted, etc., etc., which is way too much hassle. I don’t think you are exempted from this procedure simply because the RF output power of the node is very low. Because of this restriction doubt if many people in the UK will be using the DVAP Dongle either.