I’m back from my short trip to Florida where I operated from Lido Key, located just to the west of Sarasota, in west central Florida. I was very pleased with the operation this time, despite a minor glitch after the first day (which I’ll talk about later). I wound up operating from the same general area that I did on my last trip, which is from South Lido Park at the very southern tip of Lido Key. As with each trip, I learned things that I hope will help make things better for the next time, but fortunately, unlike my last trip, I didn’t run into any significant issues that had a major impact on my ability to operate. (If you’re interested, you can read the whole saga of my last trip starting with this post; there are links to the rest of the series at the end of that one.)

View K2DBK @ South Lido Park in a larger map
As with past operations from NA-034, my radio activities took place in the afternoon which allowed me time to spend some time with my wife’s family in the mornings and evenings as well as giving me some time to have lunch at my favorite restaurant in the area, The Old Salty Dog, before setting up for the afternoon. 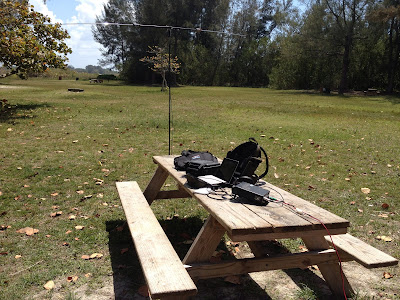 As I mentioned during my preparations a few weeks ago, the idea was to operate using the Buddipole on top of the 8-foot shock-corded mast, using some tent stakes, line, and some small S carabiners to guy the mast. As long as the wind wasn’t too strong, I felt that the setup should work just fine, and it did. The setup here was very similar to what I’d done in the past, but I wound up having to drag the picnic table over to where it was close enough to the car so that I could run the power cables to the battery. On the first day, I wound up having a very late breakfast so I decided to skip lunch and headed right for South Lido Park. The first difference from previous years was that although it was almost the exact same days as previously, this year, there were a lot more people in the park, which meant it was a lot harder to get to my “favorite” operating position. On the map here, I’ve put a red marker on the spot, which is just off the south end of the parking lot.

There was a reason why there were more people this year: It was quite a bit warmer than in the past. In fact, the weather was absolutely beautiful, with temperatures in the mid-80s under a beautiful blue sky with just a few clouds on the horizon.That warm weather led to my first small problem: As with my trip to Costa Rica, I was using my iPad with the Hamlog logging software to log my contacts. (Just a quick side note about Hamlog, Nick, N3WG, has done some great upgrades to recently, including the ability to save your log to a cloud server. Very slick stuff.) The one big difference is that when in Costa Rica, even when it wasn’t raining, I was usually operating in the shade, not in direct sunlight. When operating from the table you see in the picture, I was in direct sunlight. After a few minutes of having the iPad set up, it shut itself down due to the heat. What I wound up doing was to use the backpack bag from my radio to shield the iPad which kept the temperature down to a point were it was no longer shutting off. Lesson learned for next time.

I initially set up to operate on 21.260Mhz and although I did make a contact with Vasily, ER4DX in Moldova who was CQing a bit above that frequency, I wasn’t getting any “takers” so I decided to switch to the main IOTA frequency of 14.260Mhz. I started calling CQ there and after a few minutes, George, KC2GLG, who had read my previous posting about the IOTA activation, heard me and answered. We had a nice chat, and I then moved on and worked about a dozen other stations that day.

I did have a bit of an issue with the antenna on 20m, though I was able to work some DX (Sweden and the UK). With the configuration I was using, it was very tough to get a good SWR and I seemed to be getting some RF back into the radio. Scott, NE1RD, wrote me and suggested that I set up for 20m in a vertical configuration, but unfortunately I didn’t have time to test that configuration before I left home. Even though I had Scott’s excellent Buddipole In The Field [PDF] book with me on my iPad which has a cookbook section to help set things like this up, by the time I decided to try this I was hot, tired, and it was getting late so I decided to call it quits for the day. So that takeaway lesson from that was “try everything before you leave”.