Yesterday was one of those clear, blue, sunny, still, cold days that make you think it would be a criminal waste to stay inside. I decided to try another Wainwrights On The Air activation using my WOTA Pole, which had been rebuilt since Sunday’s disaster. My intention this time was to visit the summit of Knott, LDW-082, followed by nearby Great Calva, LDW-095. I took the VX-8GR for APRS but this time I also took the Motorola GP-300 to use for the activation which I hoped would avoid the receiver overload problems experienced with the Yaesu.

The weather may have been bright, but I was not. Sometimes I seem to get periods of a few days when although physically I may be awake, mentally I am not. Fortunately I hadn’t driven far before I realized I had not put walking boots in the car, so a complete disaster was averted. That wasn’t the only silly mistake I was to make, though. 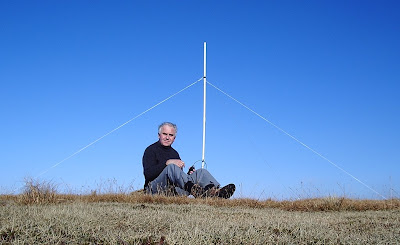 I parked at the head of Mosedale and started walking up the Cumbria Way path. I approached the structure you can see from the starting point, which turned out to be a large garden shed! The path seemed to be taking me near to High Pike so I thought I would make that my destination and visit Knott on the way back.

As I approached the “shed” I heard people making contacts with another hilltopper, Gordon G0EWN/P on Grey Knotts. I took the VX-8GR from the rucksack and made several calls using the helical whip as he completed each contact but he always replied to someone else. After ten minutes of standing around I decided to shoulder the rucksack again and continue climbing while holding the radio. I called several times when Gordon listened for “any more calls” but he was not hearing me. I don’t know why that was – another case of a radio front end being overloaded by high signal levels on the fell-top perhaps?

I reached a grassy summit topped by a tiny cairn and checked my position and realized that I was further from High Pike than I thought. I also then realized that I didn’t have my walking stick! I must have left it by the “shed” when I stopped to try to work Gordon! I turned round and went back. I retrieved my stick, but having wasted half an hour I decided to abandon High Pike and carry on to Knott instead.

I arrived at Knott still in sunshine with clear blue sky, the distant summits slowly disappearing in the haze. Although it was calm enough to try using the WOTA Pole supported in my rucksack I decided to use the guying kit from the MFD that I’d brought with me in case of windy conditions to avoid the trouble I’d had on Sunday. That cost the antenna some height, but on the plus side it allowed me to operate sitting down which I was glad of as I’d been climbing for over 2 hours by this point. Whilst I ate my lunch I connected the VX-8GR to the WOTA Pole and it was picking up APRS packet bursts from as far afield as Norway and Holland. VHF conditions were obviously up. 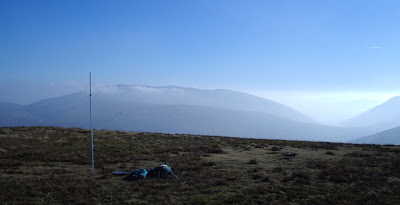 When I finished my lunch I connected the GP-300 to the antenna. This was when I discovered I’d brought the wrong speaker-mic. One of the hazards of owning too many hand-held rados I suppose! It was not a major problem of course, as I could use the radio without it. I made several contacts from the summit of Knott the most distant of which was G6ODU in Ormskirk, Lancashire, not a bad haul from the North Lakes.

The wind was so calm my Olympus voice recorder logging device was able to make a high fidelity recording of the activation. In case anyone is interested to hear what it sounds like at the sharp end of a WOTA activation here is a recording of about 8 minutes of activity. The loud, punchy audio from the Motorola GP-300 really helps so you can hear both sides of the contact equally well. Some of the quality has been lost compressing it down to an MP3 file of reasonable length but it’s still almost like being there!

I would have liked to stay on the hill longer to see what else I could work, or even move on to Great Calva to activate that, but a thick bank of mist was approaching and I didn’t want to be up there in mist. There are few clear paths on these infrequently walked grassy summits and without any landmarks to aim for it would be easy to get lost. Even though the visibility was clear I still went the wrong way off the fell and hit the Mosedale to Skiddaw House path much closer to Skiddaw House than to Mosedale. That cost me an extra 3km or so of walking to reach the car, by which time the mist had arrived and the sky was a grey murk.

This was long walk for only one summit activated. I could have made more if I’d had my wits about me and things had gone according to plan. But on a day like this it’s good to be out however many summits you activate!