It’s probably a character weakness, but I have always had a tendency to push my luck a bit too far and end up regretting it. That thought was in my mind when thinking about what to do with the Trio / Kenwood TH-205E that I got for a song on eBay. The rig worked well enough already to do what I thought I would do with it if it worked. But I was finding it hard to resist the temptation to see if I could restore it to full working order even though there was a risk that I might end up breaking it completely. 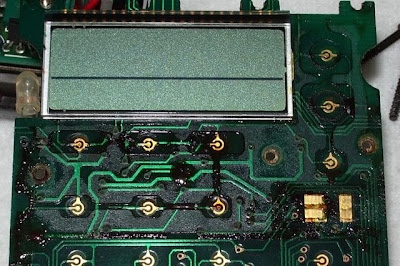 In the end, the temptation to try to restore it won. The radio came apart quite easily – it is a big radio, and fairly easy to work on, though surprisingly for 1986 vintage equipment it uses a lot of SMT parts. The back half is a solid cast metal chassis containing the IF and RF boards, and the front half is plastic and contains the front panel with the control logic. The two halves are linked by two ribbon cables and one had been inserted a bit crooked, which led me to hope that repositioning it might solve the problem of the inoperable buttons, but that proved not to be the case, so the front panel board had to come out.

The front panel board is secured to the front panel itself with a large number of small self-tapping screws. Once they were removed and the wires to the speaker and mic unsoldered, the board came out to reveal the sight shown above. The front panel buttons were not sealed units but capacitive switches operated by contact with the rubber buttons, and they were covered by a sticky mess of gunk – presumably the same stuff I had found on the outside of the case which a couple of readers informed me was a cleaning agent used to spruce plastic items up prior to sale. This hadn’t just distributed itself over the switch area, it had even penetrated through some of the vias to reach the other side of the board. What a mess!

Olga found me a few small pieces of rag and I went to work with some white spirit from the garage. I eventually managed to clean most of it off. My fears about causing even worse damage were raised when the LCD display fell off. It didn’t seem to be attached to the board and had perhaps become stuck to it with some of the gunk. However when I reassembled the radio I just rested it in place while I fixed the PCB in place and it still worked.

There was no way I could test if the switch contacts were clean enough without reassembling so eventually I decided that it looked good enough and back it all went. I applied power with trepidation. The display lit up and I could hear hiss in the speaker. I then pressed the Offset button and was able to select repeater shift! The Scan function set the receiver scrolling slowly through the entire 2m band in 5KHz steps – very useful that! I was also able to program and recall frequencies in the three memories, although the memory buttons still need a bit of persistence to get them to work. It isn’t worth taking it all apart again just to try to improve that.

While I had the rig apart I took the opportunity to reset the power levels to give 5W on High power with a 13.8V supply and 0.5W on low power. Some previous owner had probably tweaked the power controls to give 7W out. No point in stressing the probably irreplaceable power transistor for a barely detectable 1dB or so of extra power. Then I put it all back together. Job done, and the TH-205E restored to full working order. I was feeling pretty chuffed.

I’m starting to feel a bit of affection for this big old radio now that I’ve made it as good as new. I’m thinking that it would be worth trying to resurrect the NiCad battery pack, which at the moment is showing a dead short. But there I’m really stumped, as I can’t see a way in. Clearly the plastic case is made in two halves, but sticking a screwdriver in the crack and twisting is just going to chew up the plastic. Anyone know if it’s possible?