There was a good opening on 6m this morning which lasted until early afternoon. I’d just been reading some list traffic on how good the KX3 receiver is so I thought I would plug it in to the antenna and see what I could do. After all, Six is the magic band, who needs 100 watts? 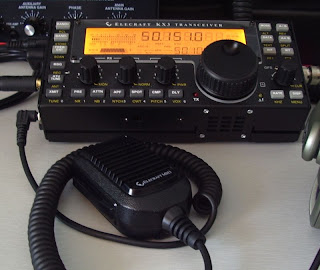 Listening on the two receivers was like night and day. On the KX3 the band sounded much more lively. Stations that were only peaking an S7 on the K3 were S9 plus.

On the KX3 with just 10 watts, just because a station was loud it didn’t mean I could work them. I got some 59 reports but with several stations they didn’t hear me even if I had no competition. The loudest stations had a lot of callers and they just didn’t hear me over the crowd. You wouldn’t think 9dB would make all that much difference but it does!

I’ve seen comments about the K3 being deaf on 6m, or even 10m, but I had never really bothered about it until now. If I can hear them on the K3 I can usually work them even though I generally limit the power to 80 watts.

But I ended up a bit dissatisfied with the K3’s receive performance on one of my favourite bands. The simple solution – fit a preamp between RX IN and RX OUT – isn’t an option for me as I need those ports to plumb in the MFJ noise cancelling device. It’s a pity no-one has come up with a mod to boost the K3’s fairly useless internal preamp on 50MHz.