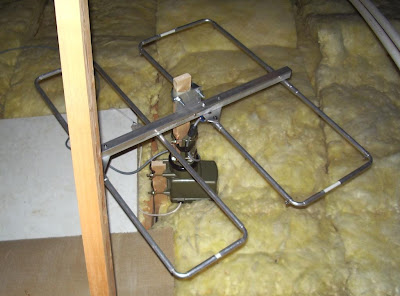 My attic, like my house, is very small. As is usual with modern British houses, the roof trusses are made of thin wood with cross-bracing for strength, so the attic area isn’t open to allow the free rotation of antennas. I have crammed rather a lot of antennas into this space to try to cover the maximum number of bands, so the VHF antennas have been forced into odd corners. Using a conventional small beam is not possible as there is insufficient space to allow rotation.

Vine Antennas claim that no other antenna gives so much gain in such a small turning circle, so it seemed like an ideal design for this situation. They claim that the directors add an extra 3dB of gain to the Moxon Rectangle design – about 9dBi which is more than a three element Yagi.

The antenna was quite expensive to buy. It is quite rugged and heavy but looks a bit home made. While the driven element and reflector made use of Jubilee clamps to tighten the main elements on to the smaller tubing used to form the corners, the directors used self tapping screws which had worked loose in transit (and probably would work loose in use due to wind vibration) and which stripped the inner hole when I tried to tighten them. You are left to your own devices to find a way to weather proof the feeder connection. Since my antenna is going to live a cosseted life away from the wind and rain I was not bothered by these issues.

The antenna presents a 50 ohm load but needs a balun to prevent feeder radiation. Vine Antennas offers a choke balun (apparently several turns of coaxial cable held in a loop using cable ties) for an extra £15. I decided to do without this, but I placed a clamp-on RFI ferrite over the cable close to the feed point which will hopefully achieve the same result.

It’s a bit early to say how performance compares with my old Moxon Rectangle. The beam width does seem sharper and the front to back ratio seems quite noticeable. I heard the GB3VHF beacon for the first time since it moved to its new location, but it is in and out of the noise on slow fading as it always used to be. I can clearly hear the Northern Ireland beacon GB3NGI, which curiously is the same strength on the SuperMoxon as it is on the ribbon cable Slim Jim (which is also due for replacement with a commercial antenna.)

This antenna is probably as good as I am going to get given the restricted space available. The SuperMoxon design is copyright Vine Antennas and commercial reproduction is prohibited, which should be borne in mind if you try to make your own version.