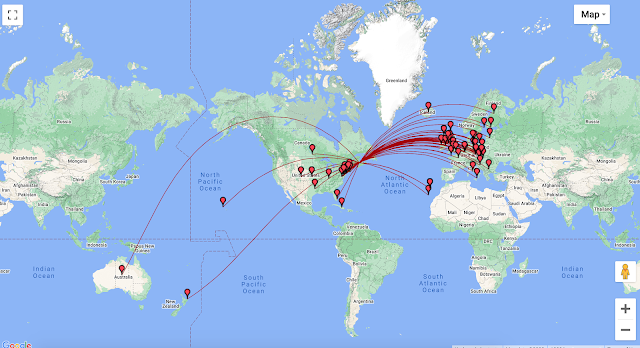 The Islands on the air contest is sponsored by the Radio Society of Great Britain or RSGB for short. This contest is only 24 hours long and hosts some very nice DX from sometimes remote and DXpedition Islands. If memory serves me correctly I found this year to be more work to pull stations out. The QSB at this end was very deep. At one moment England was there at S5 and then gone. I'm not thinking it was just me as many stations I listened to were asking for report repeats. Oh well, it's all part and parcel of the contesting dream.

I entered the CW-only category at 100 watts and it was the first time using my new Hustler 4BTV vertical antenna. As everyone has told me and it is true the vertical antenna is a bit noisier than my horizontal End Fed BUT I had better results with the Hustler 4BTV. The very small extra noise with the vertical was taken care of with the noise reduction on the Icom 7610.

For me, this was not a contest where I was running (calling CQ contest) it was 99% search and pounce. The reason for this was Island stations gave you 15 points compared to 2 points for all other contacts. The Island stations for the most part were running calling CQ contest. With this contest I found it harder to move up the band and bang off contacts and the reason for this was island contacts are big points and they are limited in numbers and that equals pile-ups.
Below is the score summary: 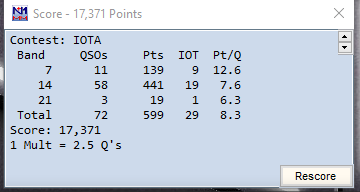 Here are some takeaways of mine from the contest:

- My CW is improving so the twice-daily practice time is helping.

- Keeping my butt in the chair even during slow times helped my score.

- Getting my backside out of bed early on the final day of the contest gave me the rewards of contacting     New Zealand, Austria and Hawaii, along with the 15 bonus points for each.

Contesting with a vertical compared to my End Fed antenna:

- Most all the time if I could hear them I could work them.